In addition to both species of pelicans, there are plenty of other birds on and around Lake Kerkini, although getting photos of them is not easy as they are generally quite distant. 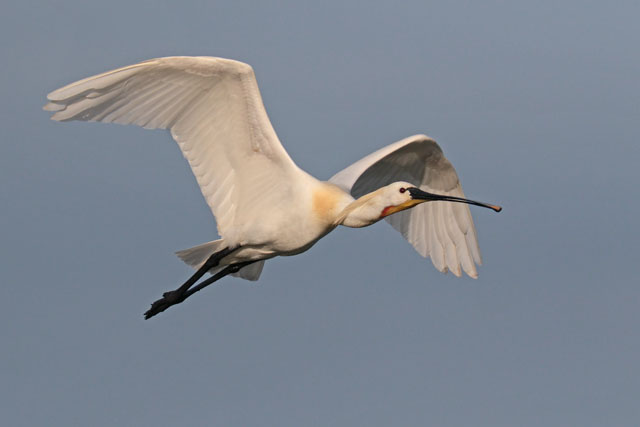 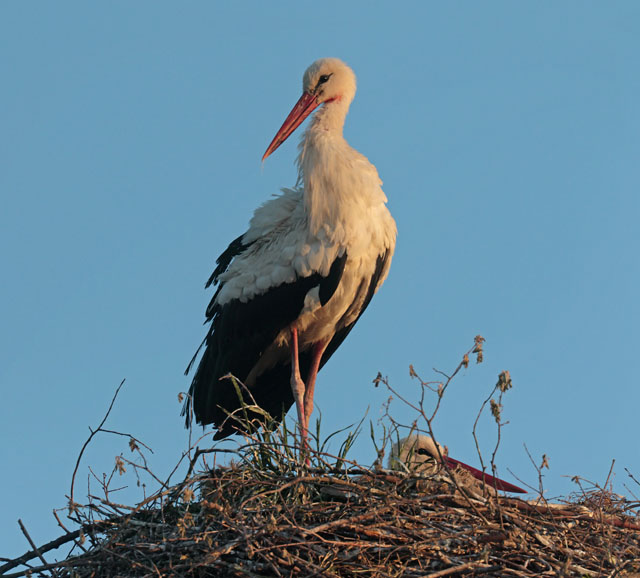 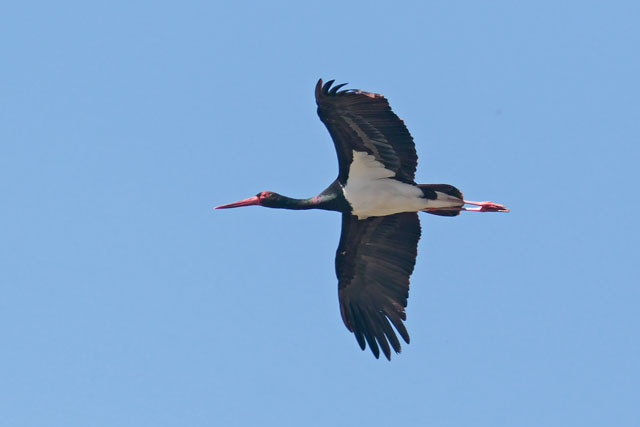 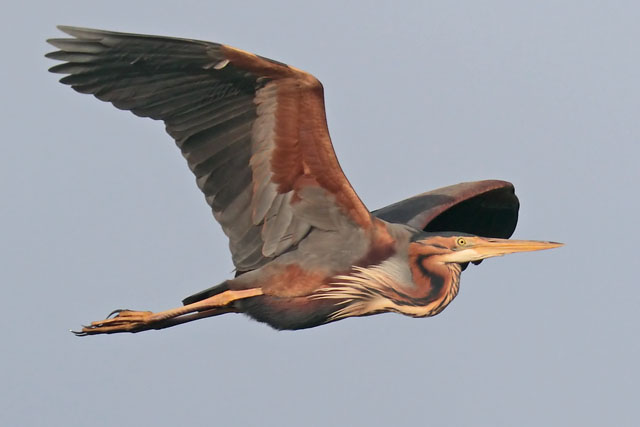 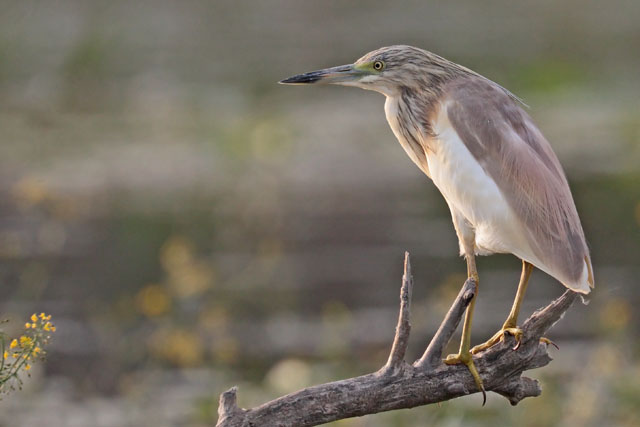 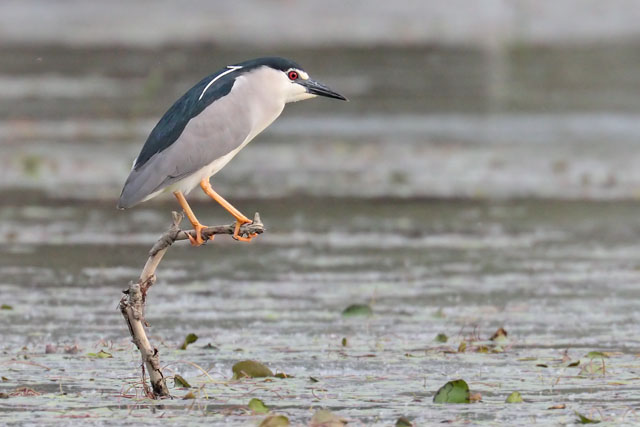 To find pelicans in Europe you have to travel to its eastern fringes. Lake Kerkini, in north east Greece, is one of the most accessible sites as it is easy to reach from Thessaloniki which has an international airport served by BA among others, with direct flights from Gatwick.

To get close to the birds there are boat trips available.... 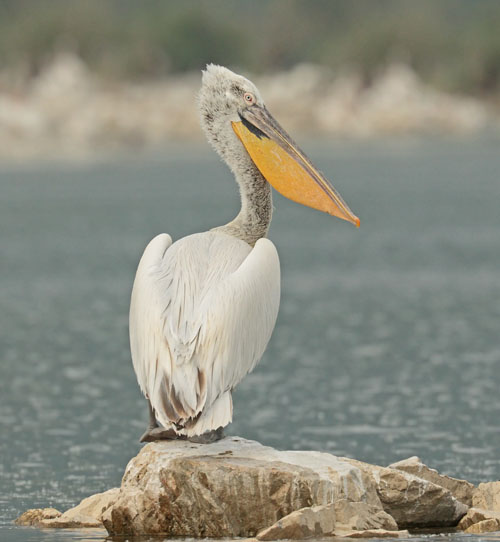 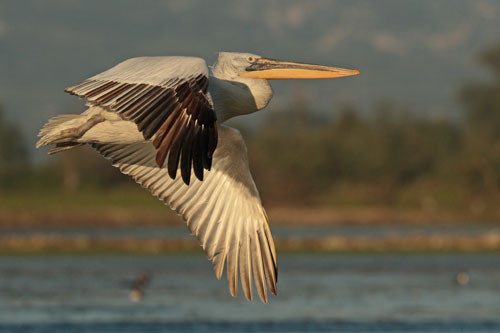 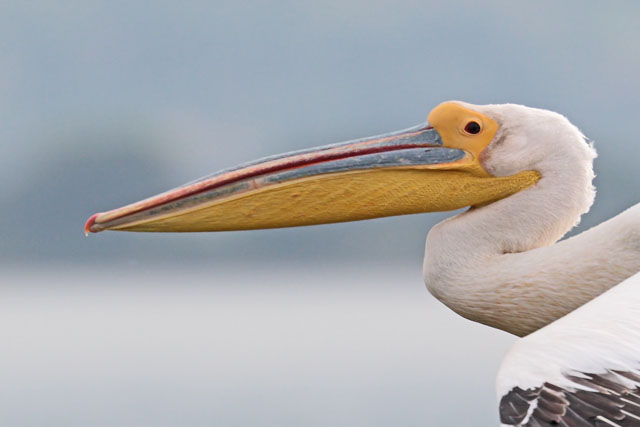 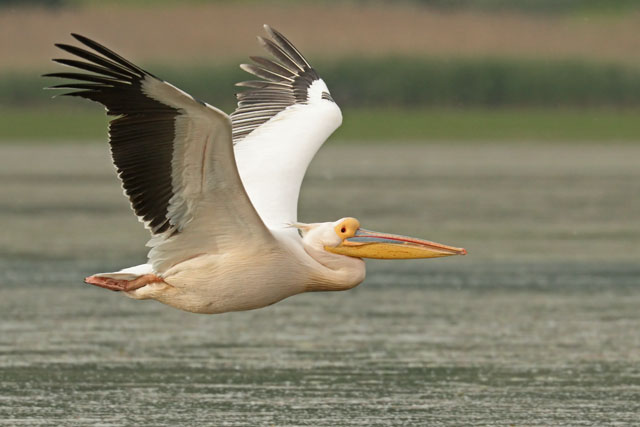 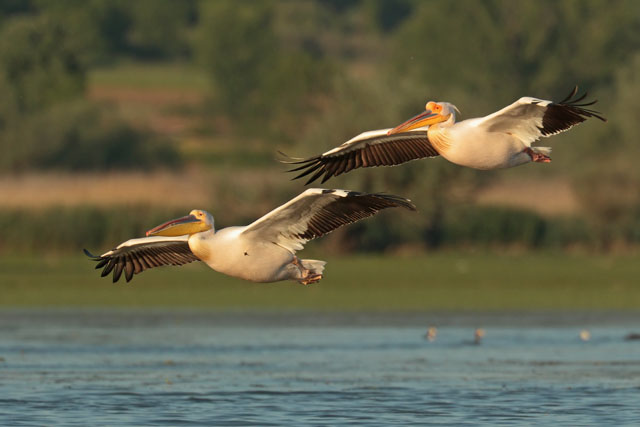 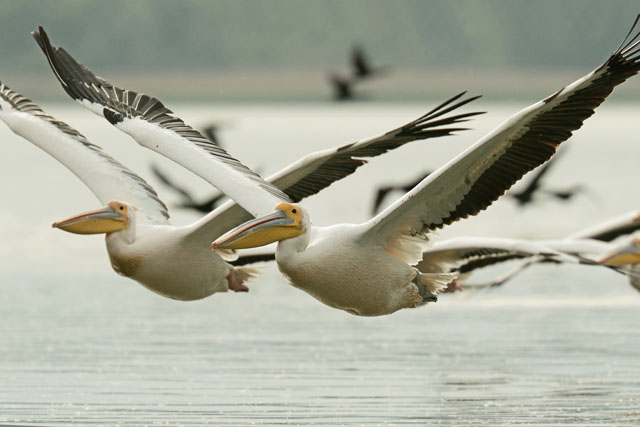 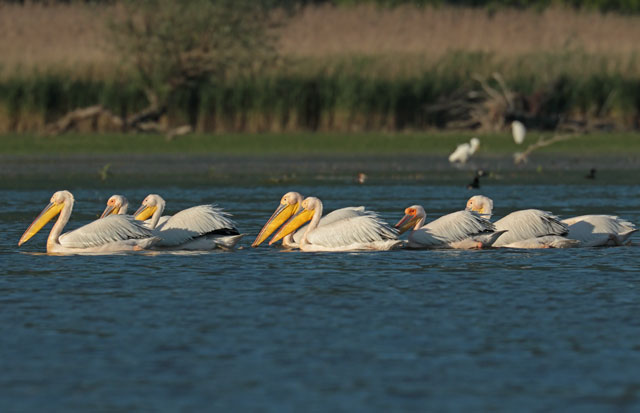 White Pelican in a feeding "huddle"

Watch out for more posts in due course, as I process more of the 4000 shots I took! A full trip report will appear on my website in due course as well.

With the morning rain (& a little snow!), a delayed start seemed in order, so it was early afternoon before I arrived at the Farmoor car park. Up on the causeway it was almost like winter with an icy wind from the north. The first birds of interest were several Common Terns flying around by the sailing club and a few Swallows over the waterworks.

But there was no sign of any Yellow Wagtails on the grassy slope, so I proceeded across the causeway to find at least five Yellow Wagtails but they were very jumpy with seemingly no chance of good photos. In the distance there was an adult Little Gull - always good to see.

So I pressed on to Shrike Meadow where all that can be seen from the hide is a bank of reeds! Pinkhill was quiet although the resident pairs of Mute Swan and Canada Goose were having a bit of an argument. There was also a pair of Shovelers at the back and I could hear the welcome song of Willow Warbler.

Returning along the causeway, I had a more prolonged attempt at photographing the Yellow Wagtails which were still jumpy but not quite as bad as before. The steady stream of cars and people didn't help though. 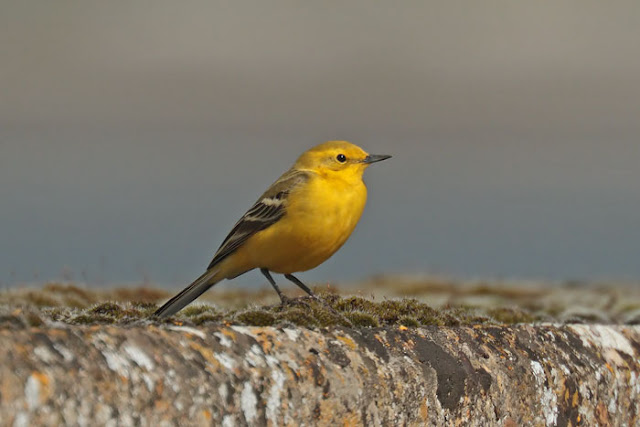 While on the causeway, I suddenly noticed a Red Kite approaching directly along the causeway towards me, so I sat still and waited for it get closer and closer... 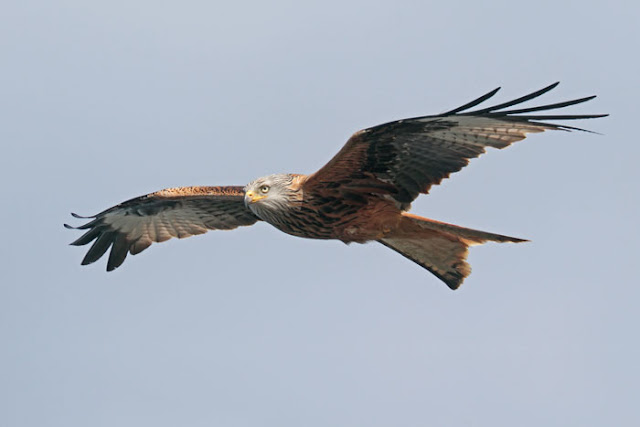 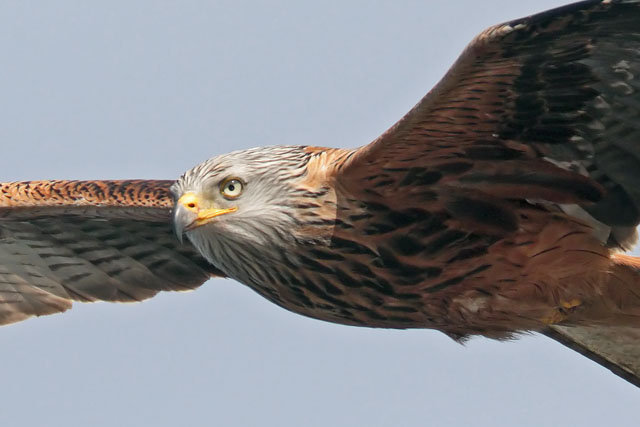 Lark Hill
On the way home, I again decided to try Lark Hill and was again rewarded by a Wheatear on the reservoir mound inside the chain link fence. 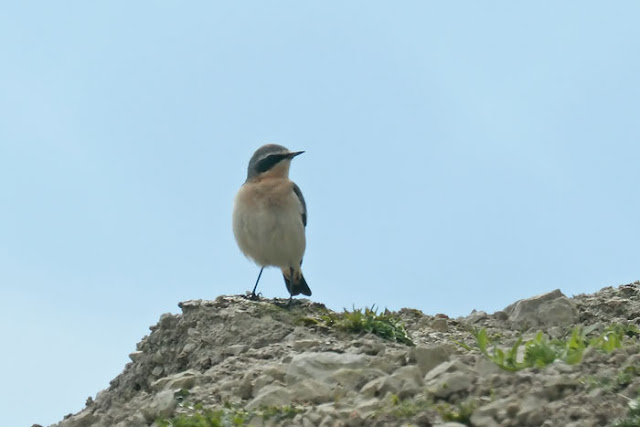 Wheatear
Posted by Stephen B at 19:18 No comments:

Today we went in search of Bluebells. Parking at the start of Fair Mile we followed a circular route up quite steeply though Unhill Wood and then back along Unhill Bottom. The Bluebells weren't fully out yet, so not at their best, but there was still a reasonable display.

Apart from the customary Kites and Buzzards, the only birds of note were a noisy pair of Nuthatches. A few years ago, there was a Lesser Spotted Woodpecker calling on this route, earlier in the season, but of course there was no hint of one today. 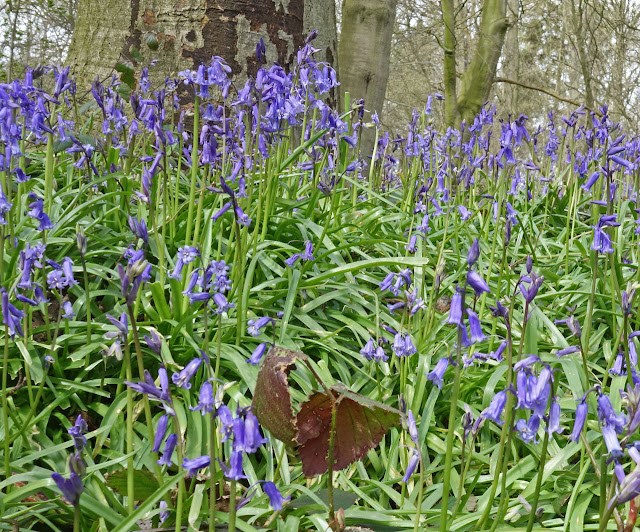 Bluebells galore - click for a bigger version
Posted by Stephen B at 16:18 No comments:

Linkey Down and Farmoor 9 April

There were 3 male Ring Ouzels still on Linkey Down today, but despite a good deal of waiting they didn't oblige. They weren't showing very well and disappeared for long periods of time. Also of course plenty of Red Kites, before the rain arrived. 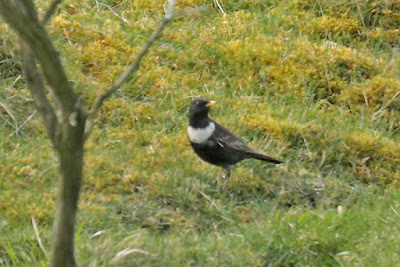 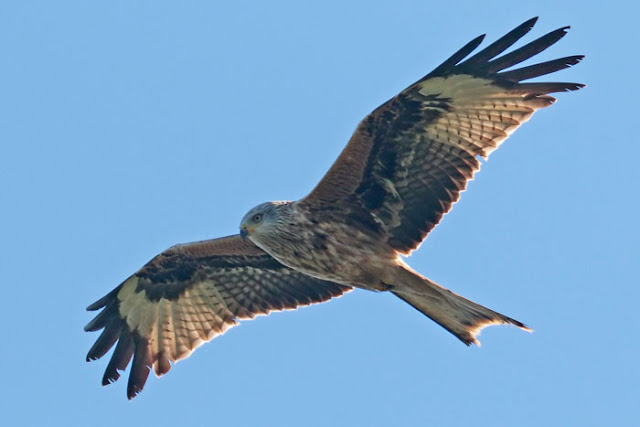 After this extended and partially successful visit, I got a helpful text from Badger saying there was a Slavonian Grebe at Farmoor, so with visions of a splendid, summer plumage bird close into the bank, I set off on the lengthy cross county drive, via Abingdon.

By the time I arrived, the lovely weather of the early morning had well and truly disappeared to be replaced by leaden skies and a cool wind. Arriving at Farmoor, I was told the Slav was about as far from the car park as it could be - off the west bank of F1! Undeterred I set out and passed the customary pair of Great Northern Divers off the causeway before arriving at a small group of birders observing the Slavonian Grebe. Unfortunately, not only was it very distant and asleep, but also it was showing only a hint of summer plumage. In fact when it first briefly raised its head, my grotty photo suggested to me it was only a Little Grebe. The next time, it was just about identifiable  but when the bird doesn't even fill the central focusing square (the small one you get with spot focus), you know you're not going to get anything worthwhile! As nobody else has posted a pic of it yet, I will risk derision by showing the shot! Still, this did mean I have now seen all 5 British Grebes this year, all in summer plumage, or traces thereof. 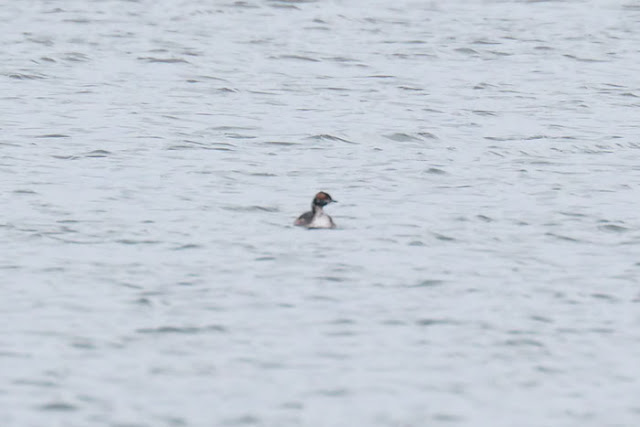 I then heard from Badger that the Channel Wagtail and 2 Yellows were showing back over at the waterworks, so I gave the Grebe up as a bad job and with it getting very dark, headed back over the causeway to find... all the wagtails had gone! Such is life sometimes! It then started to pour down and the temperature plummeted so I beat a hasty retreat.
Posted by Stephen B at 19:22 2 comments:

With the excellent weather today from late morning onwards, a prolonged visit to Farmoor was clearly called for. I started with the Red-necked Grebe which was in its usual spot in the SW corner of F2, where I meet Badger who was more interested in a mega distant Sandwich Tern!

Unfortunately, the grebe wasn't very cooperative, and seemed reluctant to get within an "interesting" distance of the shore. It also seemed to be ignoring the nice calm water just off the southern shore, preferring the rougher conditions off the west bank. When it decided to head off N towards the causeway, I thought it was time to try for the Great Northern Divers which I expected to find in the SE corner of F1. En route I once again came across Badger and some other birders looking at the Sandwich Tern which had changed buoys and was now on F1, but too far off the causeway for reasonable DSLR shots. A wait for the bird to fly ended with it doing just that, but instead of flying towards us and over the causeway it headed away and did a circuit of F1 before disappearing into the distance back over F2. With little to show so far for my time, I headed across the causeway to the SE corner, where both GNDs were really close in but they moved away before I could get onto them.

A longer wait was then needed for one of them to show reasonably close. During this time, I had a brief view of what must have been a Yellow Wagtail, as well as two Grey's and some Swallows. 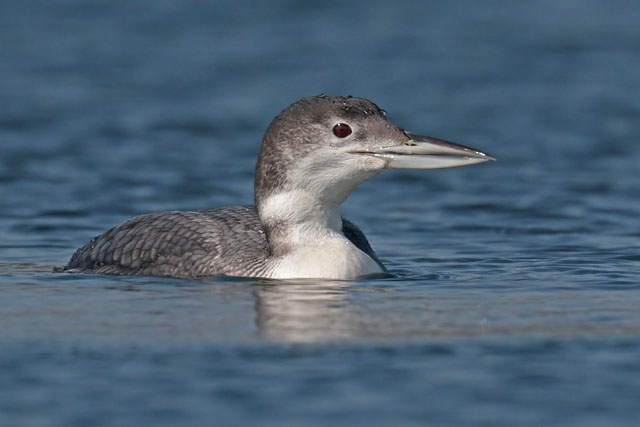 After the divers drifted away, I returned along the causeway and again found the Sandwich Tern on a buoy on F1. It quickly flew off, but this time I managed a brief shot of it before it moved out of range onto F2. 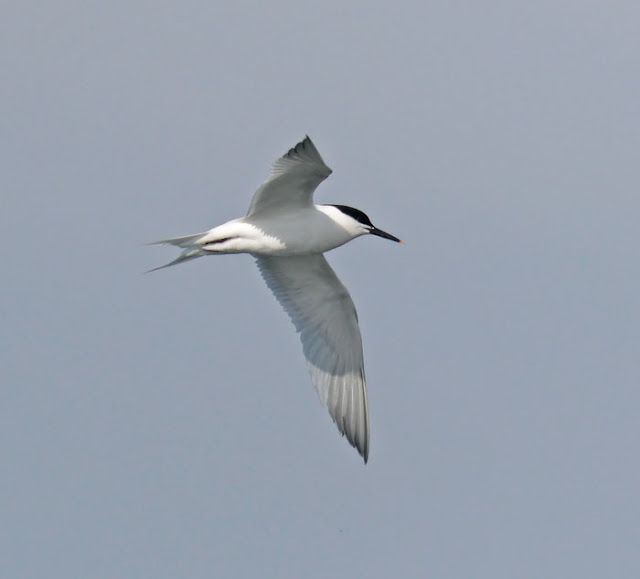 Returning to the grebe's patch, I found three other photographers in place but the bird was being slightly more obliging than this morning. 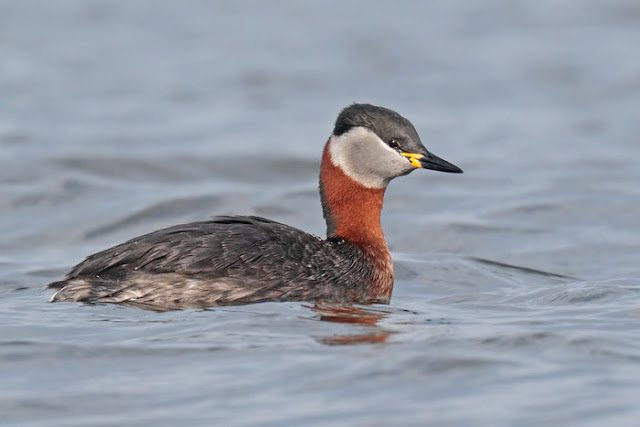 So eventually a successful visit, over a period of about 6 hours!
Posted by Stephen B at 09:18 No comments: