Having failed a couple of times to connect with the Hawfinch invasion, I was resolved to try to make this third time lucky. So having got some useful info from Gnome, I headed to the Eynsham Hall Gate House. Naturally come the weekend, the weather had changed so instead of the lovely blue skies and sub-zero temperatures during the week, it was now dank, very grey but still cold.

Arriving at c. 09:30 there was a Fieldfare in the laden berry bush in front of the Gate House, but no sign of anything resembling a large finch in the tree tops. And so it stayed. An hour passed without a lot happening, apart from Great-spotted and Green Woodpecker fly pasts. Another hour passed and I began to think about giving it up, but I resolved to give it until 12:00.

Just before I was going to leave, I made a phone call, whereupon midway through the call I spotted a couple of birds that looked just right for Hawfinch fly into a distant tree, behind the ones behind the Gate House! Cutting the call short, I was able to confirm the ID but they were not easy to photo, being obscured by a tree in front. After just a few minutes they flew down lower and disappeared. A good time to go and warm up in the car! 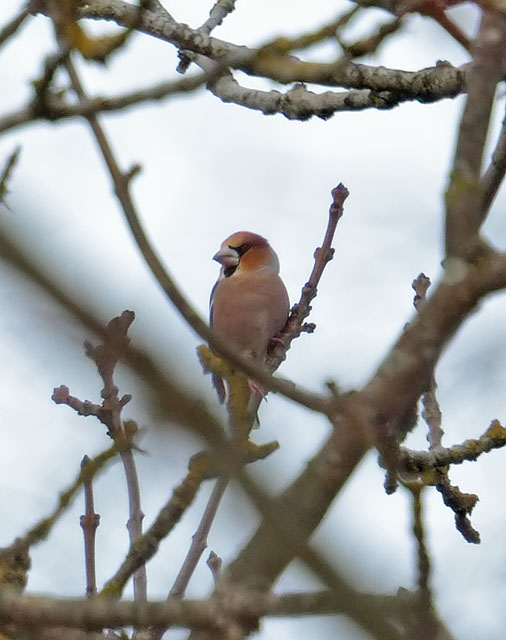