Today was the first real chance I had to go for the Red-rumped Swallow, so it was great to hear from JFT that the bird was still present at around 07:30. So off I went, battling the rush hour traffic northwards. Having to almost traverse the full length of the county, and with a brief stop at the services, it wasn't until about 09:00 that I arrived to a distinctly dank Grimsbury Reservoir.

I started along the W side path, and initially had the place to myself. Fortunately, I managed to pick the bird up low over the reservoir quite quickly and then set about trying to get some photos. At this stage the bird was coming in low down, close into the W bank of the reservoir. To get any photos, this involved shooting through the chain link fence. With this and the poor light it was surprising I managed to get anything at all worthwhile. 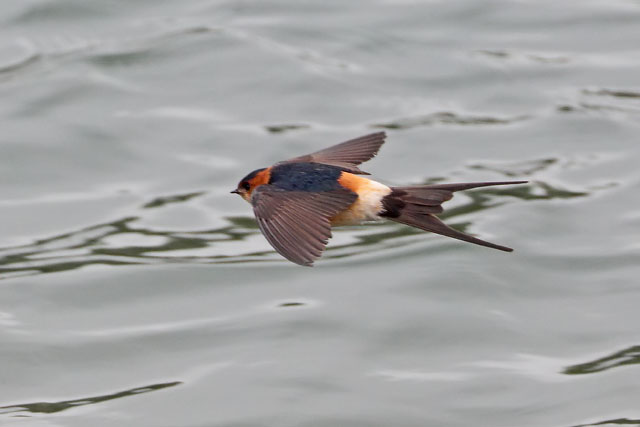 It then perched up on the fence not far from me, but was regrettably flushed by an approaching dog walker seconds before I could get the big lens into action (why do they always come along at just the wrong moment!). I then lost it for a considerable length of time. A photographer from Nottingham recommended the northern end for shots of it perched, so that is where I headed. The rain then really started coming down. There were plenty of hirundines perched, mostly House Martins, but there was no sign of the Swallow.  Also a nice group of 3 summer plumaged Dunlin in the heavy  rain and at least one Common Sand.

A passing dog walker then said he had seen it (or something that sounded quite like it) over on the east side, so that it where I tried next, to no avail. Finally, I decided it was time to go, and headed back down the W side, only to find the RR Swallow nicely settled on the fence, just about where it had been around 2hrs ago! This time it stayed put just long enough for me to get a series of photos. 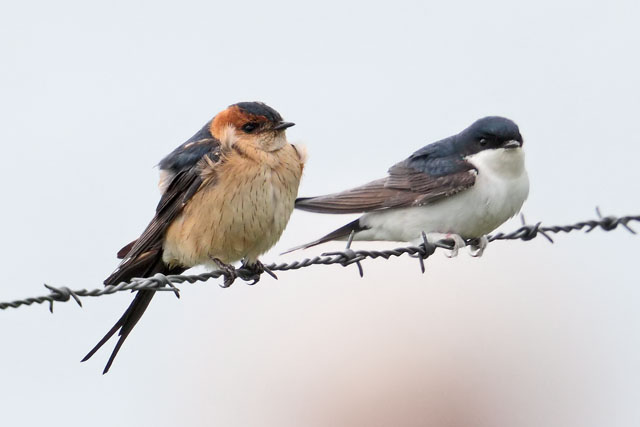 Red-rumped Swallow and House Martin
For larger versions of these images, click here
Posted by Stephen B at 17:03