We spent a couple of nights on the south coast, staying in Chichester for the bank holiday weekend 4/5 May.

On the 4 May, Titchfield Haven proved quiet with only Avocets coming moderately close to the hide from time to time. The only waders at high tide along the shore were Turnstones,  a few of which were in summer plumage.

By the time we got to nearby Farlington Marshes, the tide was well out and there was little to see, apart from a distant Little Tern, and several Whimbrel, one of which appeared to tolerate our presence more than most, but still too distant for worthwhile photos.

The following day, we strolled down to the coast at the new RSPB reserve of Medmerry which was also quiet apart from some breeding Avocets on the Stilt pool, a fly over Whimbrel and close in Sandwich Terns on the shoreline.

Later we tried Pagham Harbour and found the Ferry Pool  quiet even at high tide. The harbour itself at Church Norton was however better...

While sitting on the bench that overlooks the harbour down the track from Church Norton, and trying to ID distant terns over their island, I suddenly became aware that the nearby marshy area contained some Whimbrel. Not only that, they seemed fairly confiding and by sitting still this one eventually came pretty close. It even then tolerated me getting up to follow its movement along the shore! 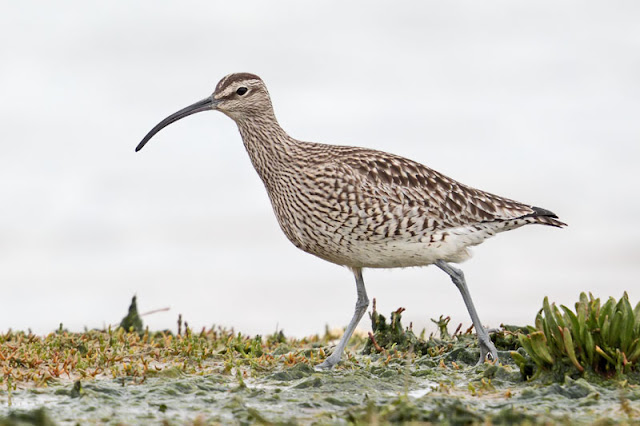 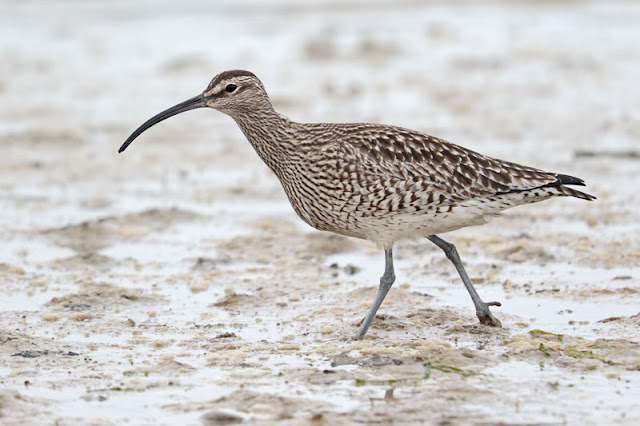 The following day we went home via Pulborough Brooks RSPB which was a new reserve for us. The main aim was the hear and see Nightingale. However we arrived late morning to find the immense car park packed (not a good start) and then wandered around the reserve to hear nothing and see very little, until we got almost back to the visitor centre. Here by a strange yurt was a volunteer listening hard. At first there was nothing, but shortly a Nightingale did start to sing, despite it being midday. But it was some way off in dense cover, on the opposite of the public footpath, so we never got a glimpse of it, let alone a photo.
Posted by Stephen B at 13:53