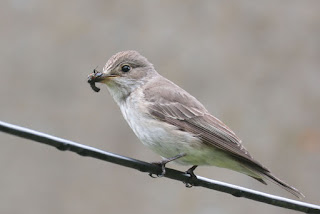 Having never seen a Black Hairstreak butterfly before, I thought I'd make an effort this year to try to connect with one. However with the awful recent weather, opportunities have been limited, especially at weekends. Today was probably my last opportunity to see one this year, so I made the mistake of believing the forecast. This indicated some sunny intervals until about midday before heavy showers started. In the event it didn't turn out quite like that!

I left the house in encouraging conditions, but things had already gone down hill before I arrived at the Bernwood Forest car park (the scene of previous more successful Purple Emperor hunts). From here it was about a 30min walk to the M40 compensation area, which, given Adam Hartley's excellent directions, I found quite easily. En-route the only sighting of note was my first Emperor Dragonfly sighting of the season.

Unfortunately, although it was only mid-morning, it started to rain almost as soon as I arrived at the M40, and in the next hour and a half there was little or no sun and a fair bit of rain. Of course, there was no sign of any Hairstreaks in these conditions, and very few other butterflies were about, apart from this obliging Marbled White. 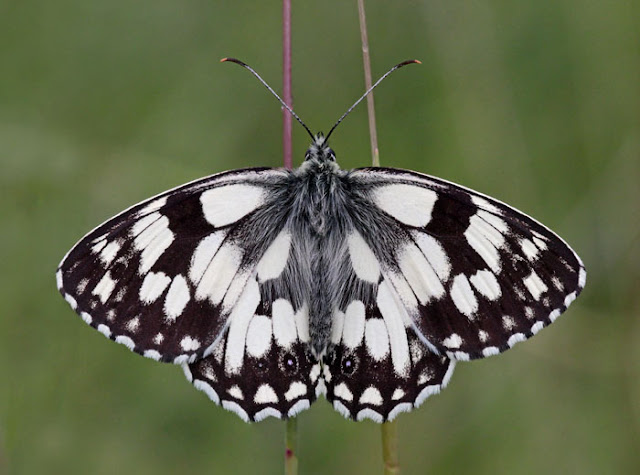 Marbled White
With no sign of conditions improving, I gave it up as a bad job, and trekked back to the car park through continuous heavy rain!

After a change of clothes and some lunch, I headed out in the afternoon to Childrey to see if I could get any photos of the Spotted Flycatchers, which turned out to be reasonably cooperative in between heavy showers, thunder and lighting - probably a reflection on the Brexit vote! 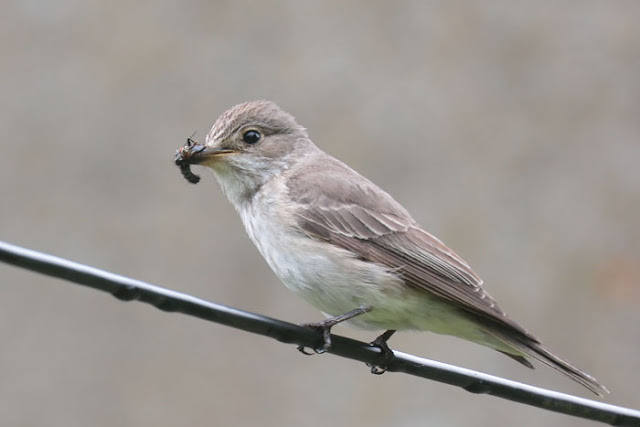 Spotted Flycatcher
Click here for a larger image
Posted by Stephen B at 09:34 No comments: 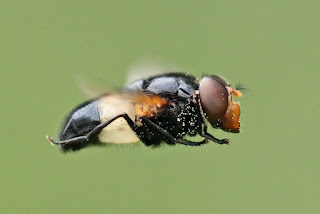 Arriving mid morning at Otmoor conditions were far from inspiring with some rain and a temperature of only about 12C. Heading along the Roman Road I could find only a couple of Azure Damselflies hunkered down in the vegetation. Along the bridleway, it was also quiet with only a distant and briefly drumming Snipe worthy of note. I somehow managed to miss the Turtle Dove that others heard and saw in its usual area by the pump house. Further on, there was a Common Tern fishing along the ditch right by bridleway but I didn't manage to get any worthwhile photos of it in the poor light.

At the first screen, it was also quiet but I did manage a glimpse of a Hobby and saw a very distant Marsh Harrier. The only bird that came close enough for the lens was this Tufted Duck, which I managed to track in from some distance out. Venturing as far as the second screen I was rewarded with a voluble Lesser Whitethroat in the adjacent hedge and more distant Marsh Harrier views. Nearer to, one of the Common Terns came very close several times on its fishing circuits. It was interesting to see the large chick on their nesting raft sheltering under the half pipes - must be very handy for dodging predators such as Red Kite. 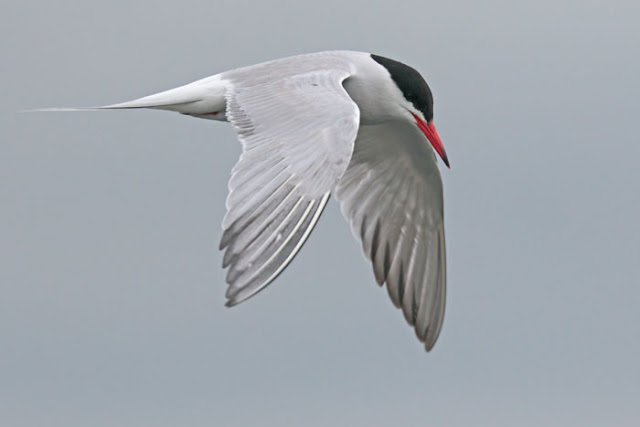 By the time I was ready to head back, it had warmed up sufficiently for a few more insects to show themselves and there were good numbers of Azure Damselflies to be seen along the bridleway and the Roman Road, including this one tucking into an unfortunate aphid! There was also an immature  Darter that I believed to be an early Ruddy from its black legs. 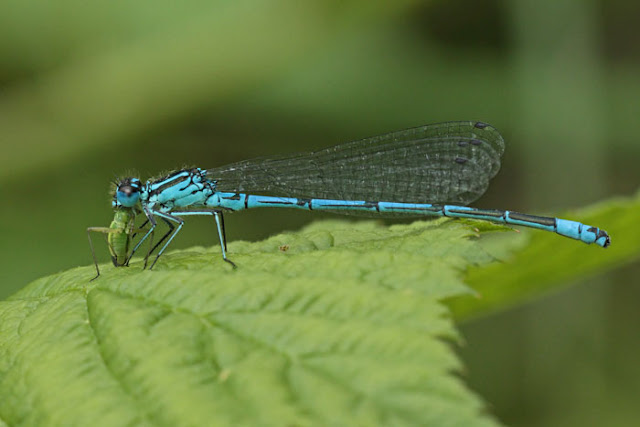 Along the Roman Road, there was even a hint of sun and the surprising sight of a couple of large flies hovering in the centre of the track, conveniently at about head height. Naturally I couldn't resist the tempetation of trying for my first FIF (fly in flight) shot using my 180mm macro!

I first posted this image on the Oxon Wildlife blog and thanks to Gareth Blockley for almost immediately suggesting an identity for it - a Pellucid HoverFly, Volucella pellucens. This image was sufficiently unusual to be definitely the highlight of the visit, even if it wasn't a dragonfly or a bird! 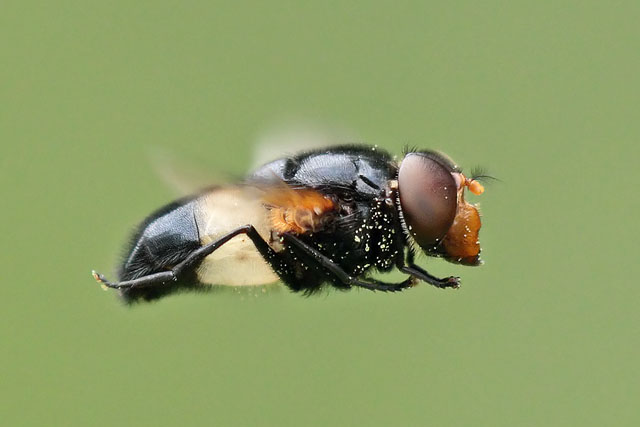 Pellucid HoverFly, Volucella pellucens.
Click here for a larger image
Posted by Stephen B at 14:45 No comments: 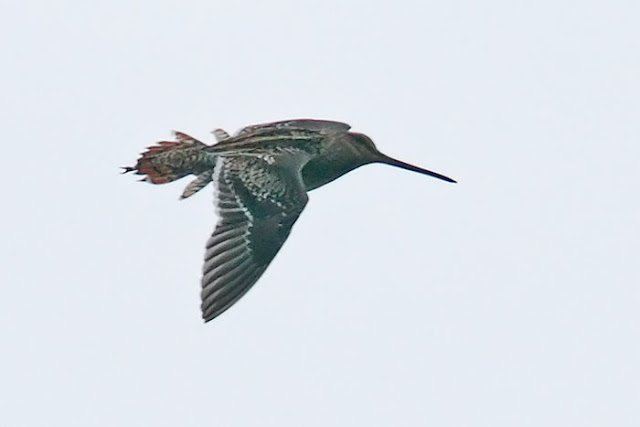 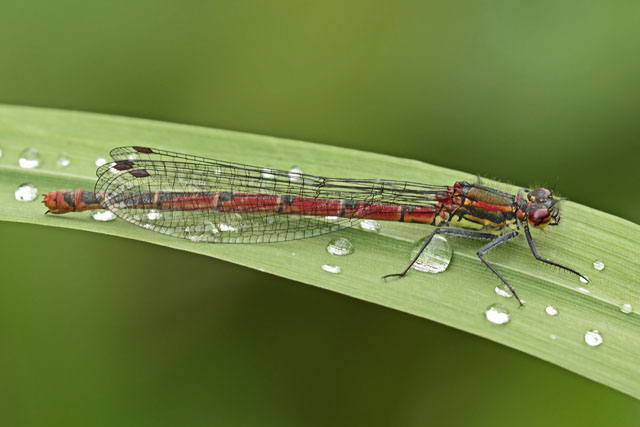 In the morning we went on a pleasant circular walk in the Rushy Lock area, which was notable for a "flock" of 4 Curlews and several large broods of goslings of the Canada Geese variety. There were also 20+ Banded Demoiselles around the lock itself.

In the afternoon, wanting to make the most of the sudden onset of lovely warm, sunny weather I went back to Shellingford Pit to see how the dragonflies were getting on. Better than last week was the short answer! There were plenty of Common Blue/Azure Damsels, a few Red-eyed Damsels and 2 Broad-Bellied Chasers, 1 Black-tailed Skimmer and 1 Four-spotted Chaser. Also perhaps my first site record of Curlew, bubbling in the distance. 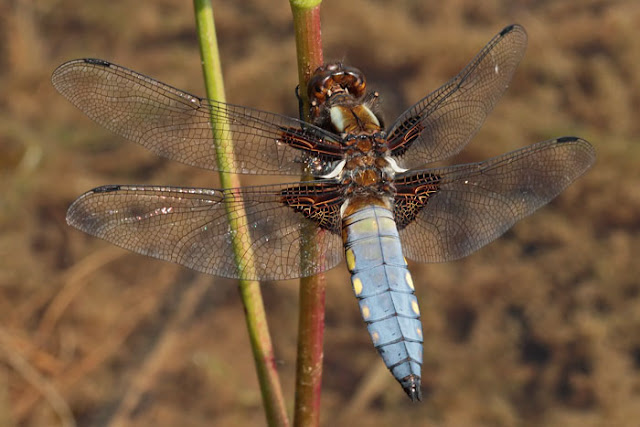 With the weather nothing like good enough for dragonflies, it was back to birding mode today! Driving along the road between Kingston Lisle and Lambourn, I was surprised to come across a summer plumage male Stonechat right beside the road. Unfortunately, it was directly into the light so very difficult to photograph properly. This isn't a bird normally seen in the county in summer, but I've no idea if it was breeding. The was no sign of a female despite some waiting 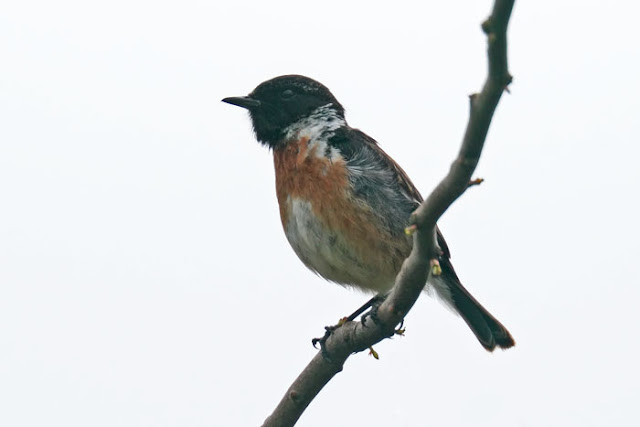 Stonechat
On the opposite side of the road, there was a better illuminated Corn Bunting singing hard from time to time. The same bush had a very skulking Whitethroat in as well! 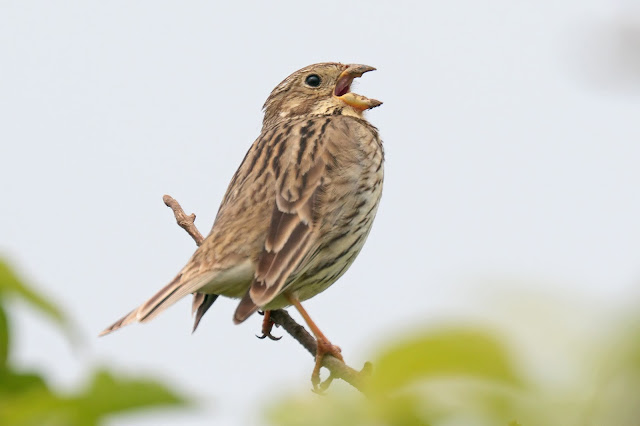 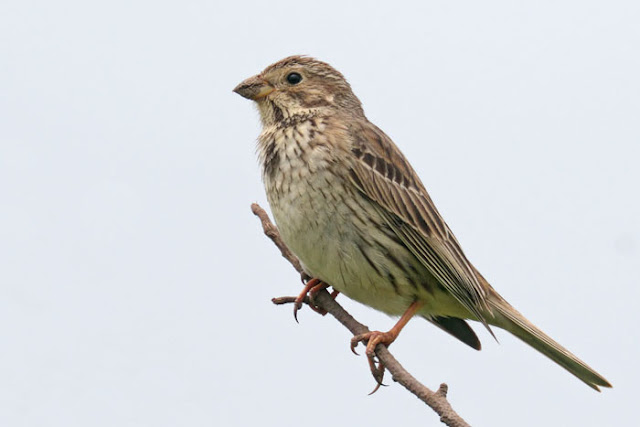 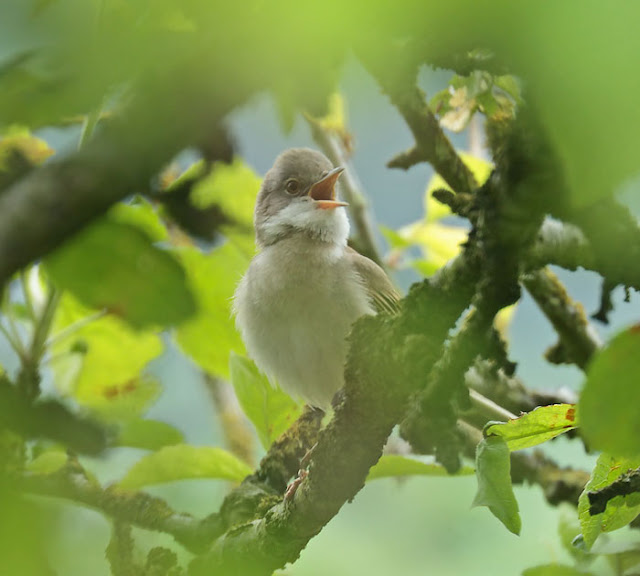