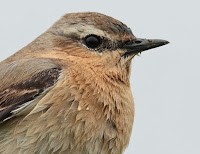 A cold and damp day - what a contrast to only a week ago! With conditions like this, Farmoor seemed to be the place to go. I arrived just after the 08:00 opening time, as I prefer to do, and found a nice empty car park. As expected, the first view over FII produced large numbers of low flying hirundines - all 3 species, and my first Swifts of the year as well.

The grassy bank on the eastern side of FI had a Yellow Wagtail briefly, but it departed before I could get my camera on to it. Walking over the causeway there were up to about 9 very skittish Common Sands on the FII side, and a single summer plumaged Dunlin & LRP on the FI side. But they also departed before I could get a photo. At the end of the causeway, there were two more on Yellow Wags on FI but they too left in a hurry without a shot being taken. Frustrating!

Still there was a disconsolate row of Swallows along the edge of the wall, which allowed a closer approach, so I concentrated on the nearest bird. 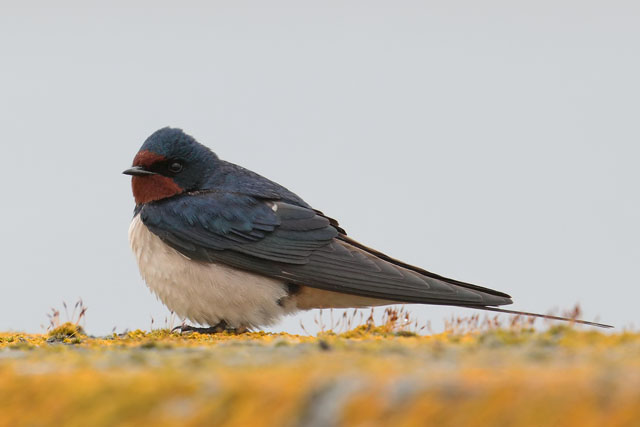 Thereafter I headed for the Pinkhill Hide to try my luck there. There was at least one Cuckoo about which made its presence known from time to time but only showed once or twice without coming close enough to have its photo taken. There was also a surprising group of 2 male Red-crested Pochards, 1 female and a male Tufted Duck joining in. They were restless, departing and re-appearing a few times, and once flew towards me and over the hide which provided this shot. 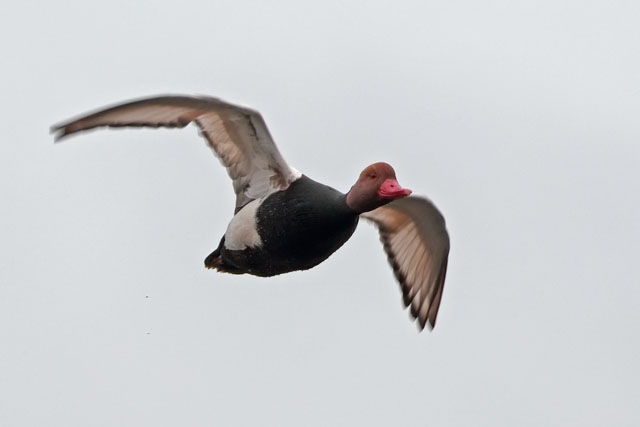 After spending some time here, without much else happening, I decided it was time to go, whereupon just as I was packing up a Kingfisher appeared and settled on a distant perch briefly. I just managed to get onto it before it departed. Always a bird to brighten up even the dullest day (which this was)! 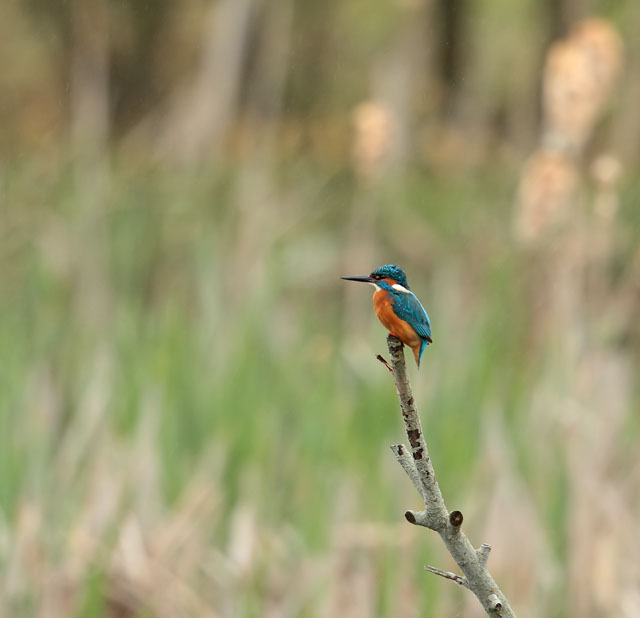 I then headed back over the causeway meeting a number of arriving birders as I went. It later turned out that two Great Skuas were seen on Farmoor that day, and I have a nasty feeling I could have walked straight past them without noticing! But if I did, none of the arriving birders had seen them by then, either. Note to self - look more beyond the causeway in future, especially on the return leg!

In blissful ignorance of the skuas, I  headed to Lark Hill where the expected Wheatears were again in residence on the underground reservoir. This week I counted up to at least four, so I spent some time trying to get some photos of them. At one point, a nice male approached the boundary chain link fence quite closely and I managed to get this shot through the fence, without too many ill effects on image quality (after a bit of Photo-shopping that is). 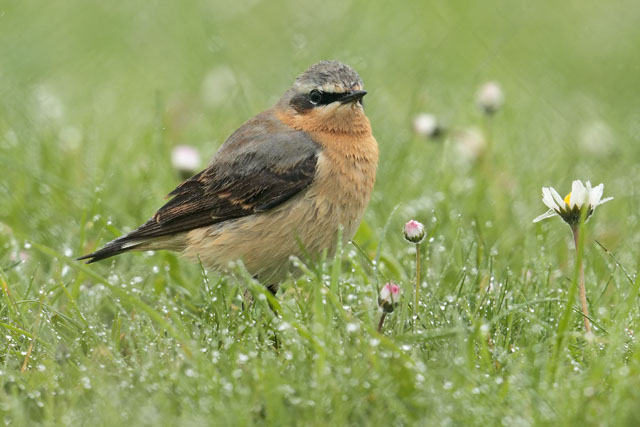 Male Wheatear in the rain!

Even better at one point a female flew up onto the fence post closest to me and even stayed there while I got the camera onto to it. At this distance it completely filled the frame, and the close up is probably more effective than the whole bird. 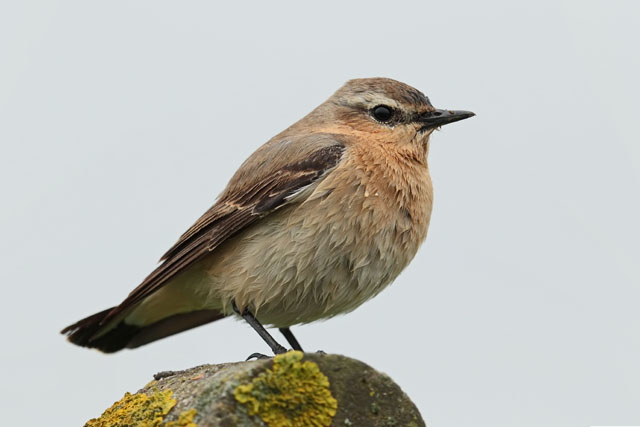 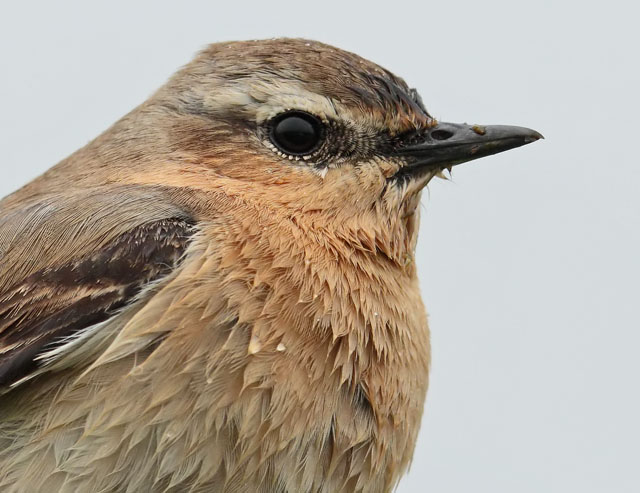 Crop of above
Goto this page on my website for larger images of all of the above.
Posted by Stephen B at 14:34 No comments: 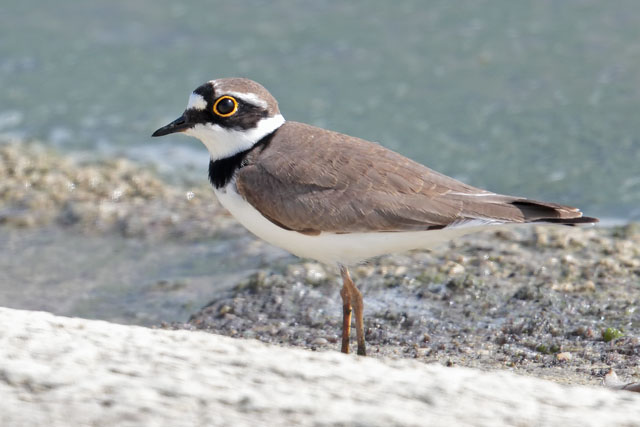 Thereafter I tried Dry Sandford Pit for early damselflies but without any success and this week the Lark Hill reservoir was devoid of birds in the continuing fine weather.
Posted by Stephen B at 14:51 No comments:

With my current mobility issue, it is difficult to find places for bird photography in Oxon. Today I thought I'd first try Shrike Meadow which isn't too far from the nearest unofficial parking at Lower Whitley Farm.

In the glorious weather, it was a pleasant if uncomfortable walk along the Thames with Chiffchaff and Blackcap very much in evidence - but no sound of any Willow Warblers. Unfortunately, there was no sign of the Barn Owl I was hoping for, but it was a pleasant surprise to find that the reeds had been radically cut back from the hide.

So it is now possible to see over what looks like a freshly created pool with the meadow beyond. Unfortunately, although there were distant Reed (or Sedge?) and Cetti's Warblers, there wasn't much else of interest apart from a couple of Snipe, one of which was flushed by a Muntjac Deer.

Thereafter, I tried the north east corner of Dix pit, where there is very close parking.  Morning isn't the best time of day here, as most of the pit is directly into the sun. In the distance, what looked like the Snow Geese flock was close into the SE bank of the pit, and a solitary Common Tern was also super distant. The heronry on the island was  in full swing also with Cormorants and another addition which maybe I shouldn't be mentioning?

Finally I tried Lark Hill, where I was delighted to find a lone female Wheatear on the south facing grassy slope of the underground reservoir - their favourite spot at this site. Regrettably the chain link fence here prevents gets anywhere near close enough for good shots, but at least being tall has one advantage - being able to balance the camera lens on the top of the fence! 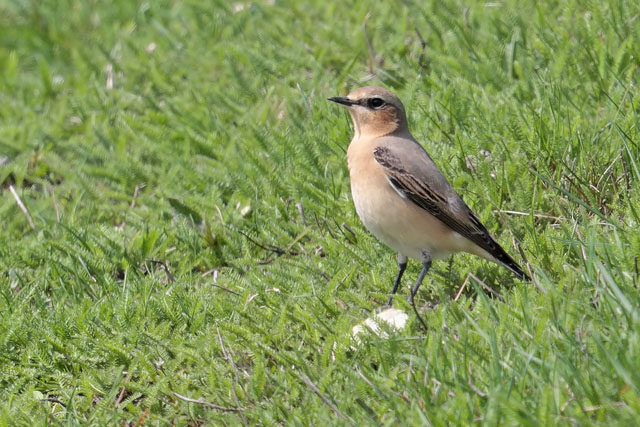 On my website, I've recently extended my gallery of selected bird photos from 35 to create a "Top 50" gallery. Each has a caption giving some background/context to the photo.

To have a look go to this page.  For some tasters see below. 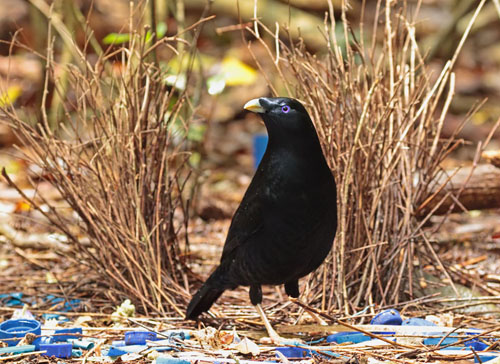 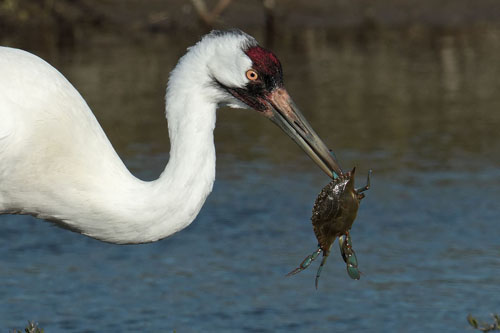 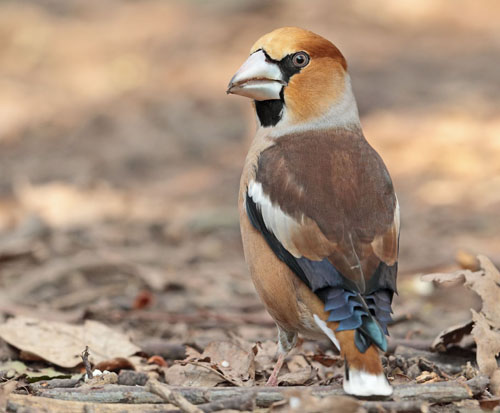 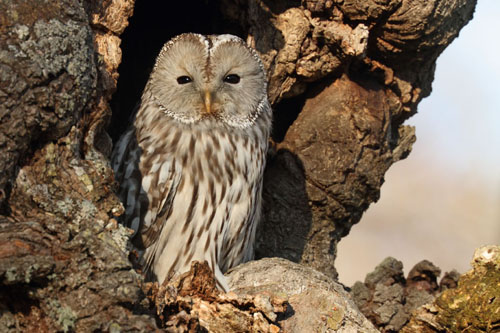 Ural Owl, Hokkaido, Japan
Posted by Stephen B at 14:18 No comments: