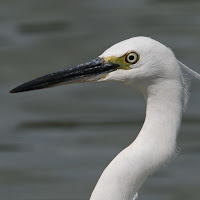 I wasn't expecting much from this visit, given the meagre recent records by others. It was quite late in the morning that I settled into the LL hide. My initial impression was there wasn't much about -  just a Little Egret off to the left and a distant Common Sand call was about it, apart from a good flock of Sand Martins over the lake.

However after a while, the Little Egret decided to come my way, and came pretty close before taking fright and flying past the hide. It then disappeared off down the far end for a time before coming back all the way round the shore. This time the sun was out briefly and the light was better as it was approaching from the "right" (i.e. northerly) direction, and I managed to get these shots as it stopped to fish and then walked right past the hide. 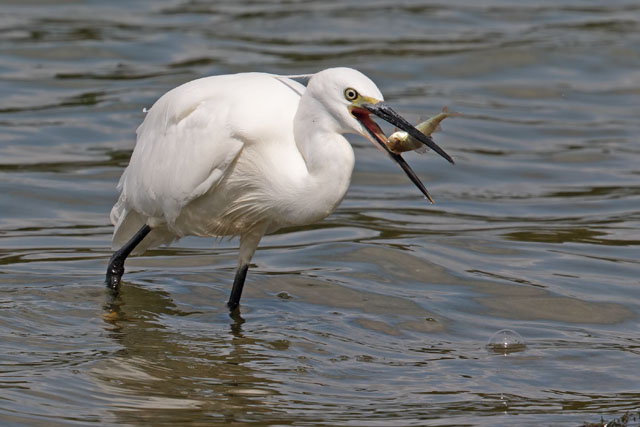 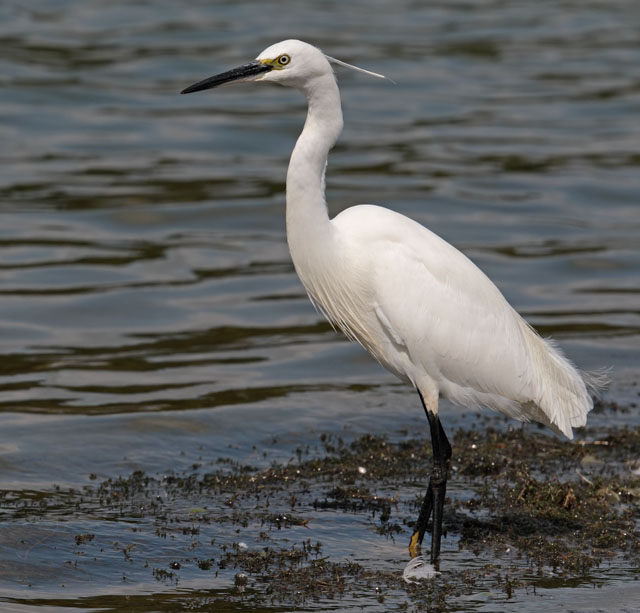 Moments after catching the fish. For a larger image click here 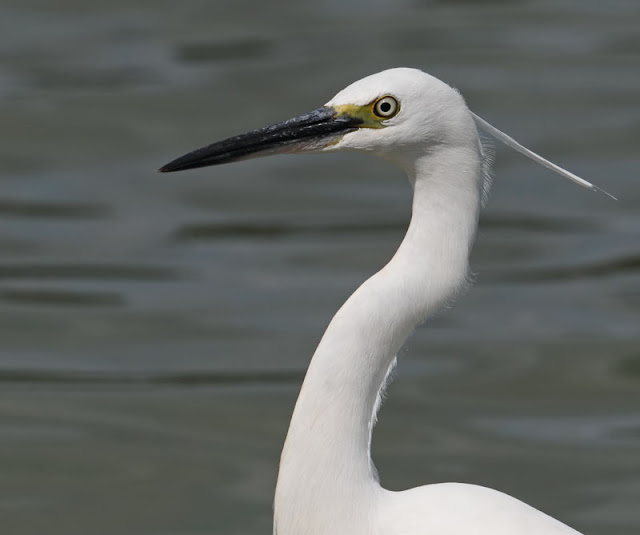 Too close for my lens to get it all in!
For a larger image click here
Posted by Stephen B at 15:06 No comments: 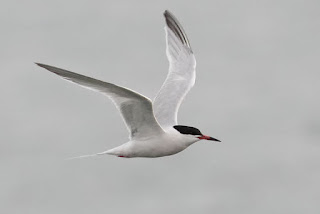 Following my moderately successful mid-week Farmoor morning visit a couple of weeks ago, I decided to try again today. I arrived around 08:30 to a grey and almost chilly reservoir - what a contrast to the recent enduring period of stifling hot conditions!

However the poorer weather didn't seem to have led to improved birds - in fact the reverse as the customary walk across the causeway produced only three Dunlin and two Common Sands. However, I then first heard and then saw a Yellow Wagtail that briefly landed behind me but it was very flighty and off in a moment.

Of these, from past experience I knew the latter to be very wary and almost impossible to get good photos of. I'd spent some time on my previous visit getting shots of the former and wasn't in the mood to try again. So I pressed on to Buckthorn Meadow and the Shrike Meadow hide which was devoid of dragonfly interest due to the cooler conditions. A Kingfisher from the hide briefly raised my interest when it first appeared in flight. It then reappeared and settled in a nearby tree - but in a position completely obscured by leaves. It was better placed from a different position along the hide but it clearly detected my movement and was off in a flash.

Pinkhill Hide wasn't productive at all, so I returned along the causeway, to find the Dunlin had departed leaving only the Common Sands. Remembering Ewan's recent tip about the causeway hide, I thought I'd try it and see if either of them would approach it, given they seemed to be preferring the F1 side of the causeway. This tactic eventually produced a result, albeit of a somewhat distant bird. At least there is almost no sign of the sloping concrete, which is the unwanted signature of many of  my Farmoor wader photos. 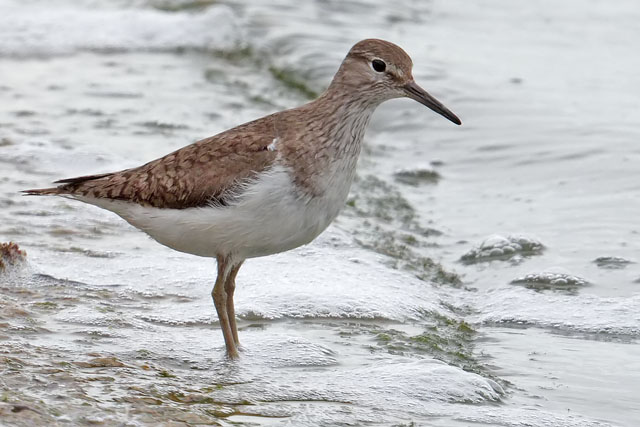 Common Sand from the causeway hide

Thereafter, just as I had reached the eastern end of the causeway, a Redshank flew in and landed half way along. I had no inclination to chase back up the causeway to try for a photo, as they, like Common Sands, as generally pretty wary. Still things were clearly moving through...

I thought that was it for Farmoor for the time being, but back at home at just before 5pm, I suddenly noticed the Oxon Blog announcing the surprising presence of a Roseate Tern back at Farmoor, found by Jeremy Dexter! This was shortly followed by a text from Badger saying the same thing.

As this would be a county tick for me, it didn't take long to put everything back in the car and head back whence I had returned from only a few hours early. I arrived at about 17:30, and came across Jeremy departing who provided some reassurance that the bird was still present (or at least it had been when he left). A good start, but when I got up onto the eastern side of Farmoor there seemed some confusion among the assembled birders as to where the Roseate was! Someone was indicating a nearby juvenile perched close in on a pontoon, but this was then dismissed as erroneous. I and the other newly arrived birders then headed off to the eastern end of causeway to find the County Recorder himself tracking the bird in his bins. It's high up and distant over there with some other terns was the general gist of his commentary! It took me sometime to spot the distant specs he was referring to, but I then got on to them and started tracking the slightly smaller one that he said was THE bird.

I stuck on this for some time, while the birds danced around very distantly but without moving beyond the reservoir perimeter, we thought. After several minutes the birds started coming lower and getting closer. Suddenly the Roseate flew right towards us and went past and landed distantly on the tower off the eastern side of F1. Here it remained for some time, but it was so distant only record shots were possible. 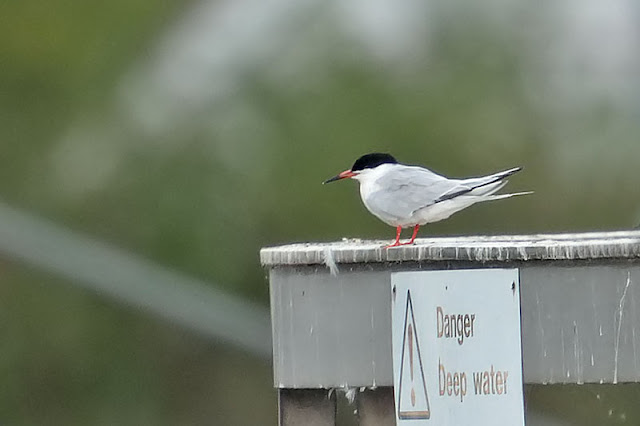 I had just about got back to where I had been when it seems the bird changed its mind and starting flying back towards F1. This time I was in the right position, and I think picked up the right bird by its distinctive call (a new one for me). I got just a few frames of the bird approaching the causeway, only one of which was in focus. So a lucky shot and a good conclusion to the day. Thereafter the rain started coming down and most birders, including myself departed. 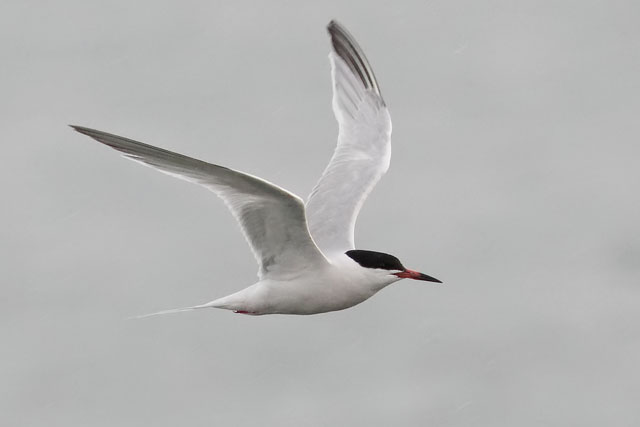 Closer Roseate Tern
Posted by Stephen B at 18:32 No comments: