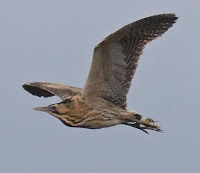 It was good to be back in the field today after a few blank weeks due to a combination of the weather and a notable happy family event. For something a bit different today, I thought I would try the Otmoor Starling roost, for the first time ever!

Mindful of the problems with car parking at the weekend, I arrived around midday to already find the place full! Happily a couple of cars left while I was getting ready to head out, so I could park in a proper space. With quite sometime to wait, I wandered down the bridleway and chatted to the Roby's and Tezzer for a few minutes, who put me on to the distant Whitefront family party out on the eastern side of Greenaways. Arriving at the first screen, there was some seating available and I settled in for a wait. Quite soon a fly past Bittern appeared but it was too distant for good results with my current lens. 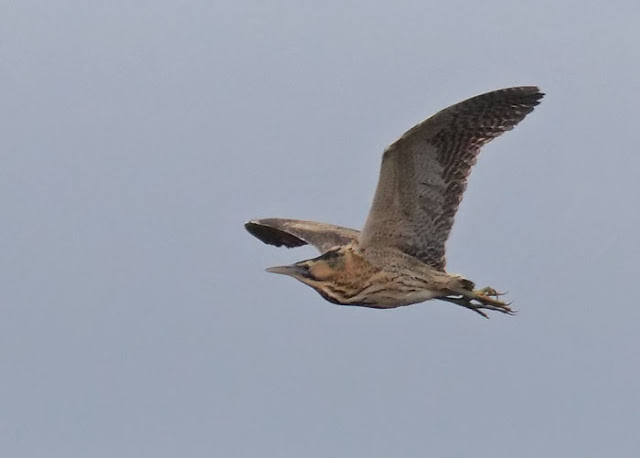 Somewhat distant Bittern
Unfortunately that was about it in terms of action from the first screen, apart from a distant Marsh Harrier that was, as usual, too far away to be of much photographic interest.

After sometime I decided to head off to the second hide which was too full of people and so I didn't say long. With the seats occupied, this place is incredibly uncomfortable for tall people since the viewing cutouts are too low, requiring me to stoop to see anything much! There was however plenty of distant Bittern activity to keep the others happy.

So after this brief interlude, I headed back to the first screen to wait for the Starlings which duly appeared from about 15:40 onwards (just when Tezzer had forecast!). Viewing was  less than peaceful with several families including small children. One even had a baby while there was another group of people in high vis clothing! Still everyone seemed happy enough with the display (apart from the baby, who made his/her feelings abundantly clear).

There was a brief murmuration before the first big group dived down into the reeds, right in front of the screen but thereafter later birds just went straight in. Others caught a brief glimpse of a ringtail Hen Harrier at the back, but I missed it unfortunately. Switching lens to the kit standard lens I got with my first DSLR in 2006, I tried several Starling shots, of which the one below probably shows the limited murmuration best. 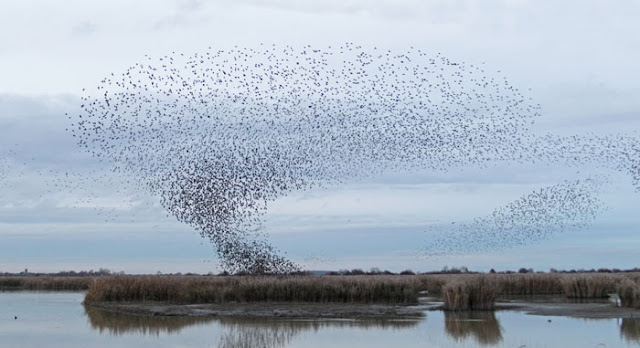 Limited Starling murmuration
Goto my website for a larger image.

Others reckoned there were of order 50,000 birds present. It was almost completely dark by the time I got back to an emptier car park, having passed a couple of birders who had had brief views of an SEO and a Barn Owl emerging from the car park field.
Posted by Stephen B at 11:40 No comments: