With the thick fog this morning it didn't seem worth going out birding, so I went for a walk on the Downs instead. Afterwards as the fog had mostly cleared and the light was again superb, I went the long way home looking for suitable photo targets from the car.

Driving along the Lambourn to Kingston Lisle road I came across a flock of small birds on some rain water filled pools, where it was possible to park off the road. Of course all the birds flew off as I pulled in, but they didn't go far and shortly one or two actually came back!

I didn't have long as they soon flew off again, and the flock gradually dispersed up the lane. Nevertheless, with the low winter sun behind me, I was pleased with this brief c. 10min stop. How different from the 4 hours waiting for Bittern shots yesterday! 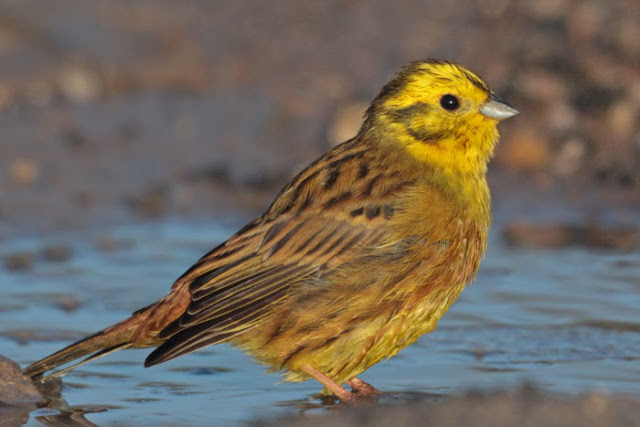 Yellowhammer - go to my website for a larger image 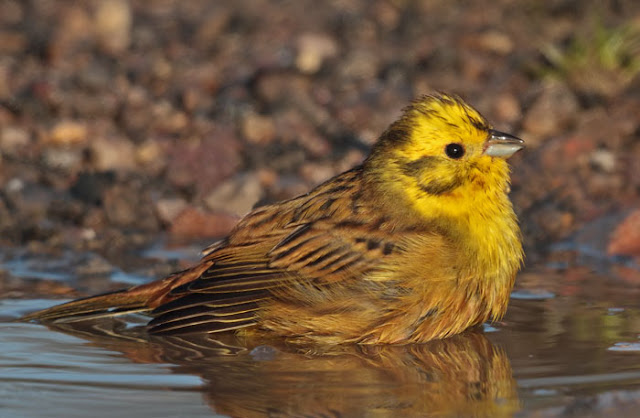 Yellowhammer bathing - go to my website for a larger image 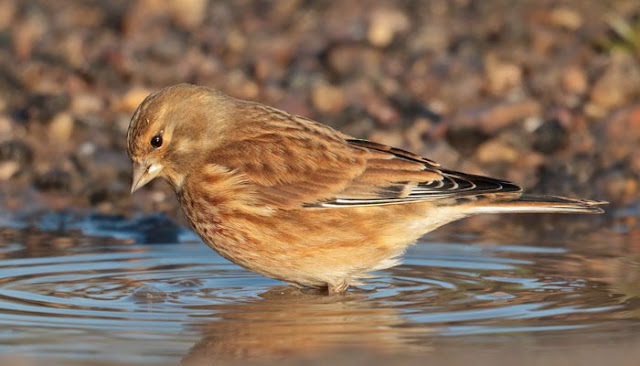 Linnet drinking - go to my website for a larger image
Posted by Stephen B at 18:26 2 comments: 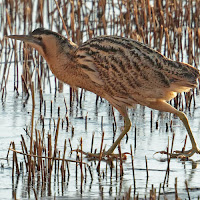 With our Christmas visitors having departed and the weather unexpectedly good, I was at last able to get out with the new lens again! But where to go? After a short deliberation, I decided on the small BBOWT reserve of Calvert Lakes near Bicester, where the Black Audi had clearly had a profitable visit just before Christmas.

With the good weather I was a bit concerned that the hide would be full, as it was last time I visited. In the event, I had no need to worry as I arrived late morning to an empty lay-by and a deserted hide. The light in certain areas was absolutely brilliant, with golden reeds and bright blue sky & water, especially along the left edge of the small "lagoon" in front of hide. But would any birds appear here?

Very shortly afterwards, a Water Rail rushed over the ice from one area of reeds to the next, in front of the hide. It was mostly in shade, moved quickly and was reasonably distant, so not easy to get a sharp image of. 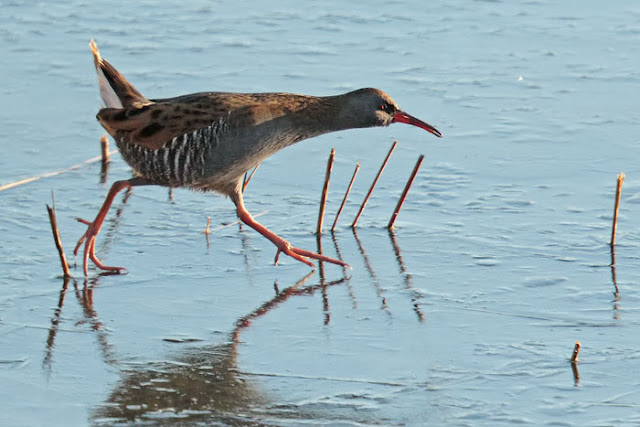 Only a short while later, a Bittern appeared briefly  at the end of the right hand side channel, again walking on the ice. Unlike the high velocity rail, the Bittern took its time, but was far too distant for really good results. 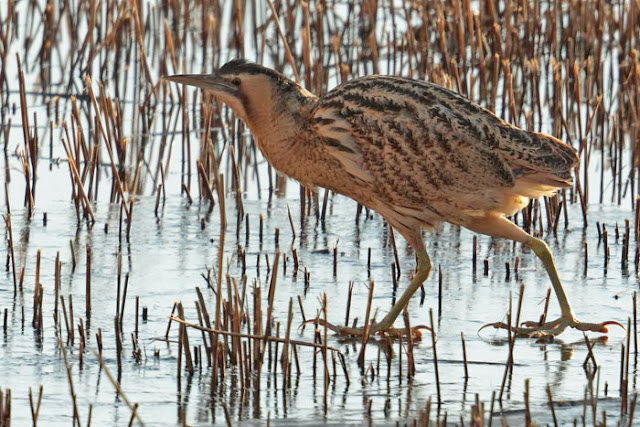 Bittern also on ice
Goto my website for larger image

After this promising start, there were unfortunately no further photo opps in the almost 4 hours I spent there. The Bittern, having crossed the side channel, appeared about half an hour later at the far left corner of the right-hand triangular patch of reeds. However it remained almost motionless for at least an hour, well withing the reeds. I was hoping it would then emerge and walk around or across the small "lagoon" in front of the hide. But it didn't and instead just vanished back into the same triangle of reeds and never showed again.

While it was visible, another Bittern rose from the back of the same reed triangle and flew a short distance before pitching into the middle of the left hand reed triangle, where it appeared to remain for the duration of my visit!

During the long wait, attention tends to drift to anything avian. Unfortunately the feeders to the left of the hide were empty, unlike my last visit when Marsh Tit(s) were coming to them. Nevertheless a few tits put in brief hopeful appearances, including this one: 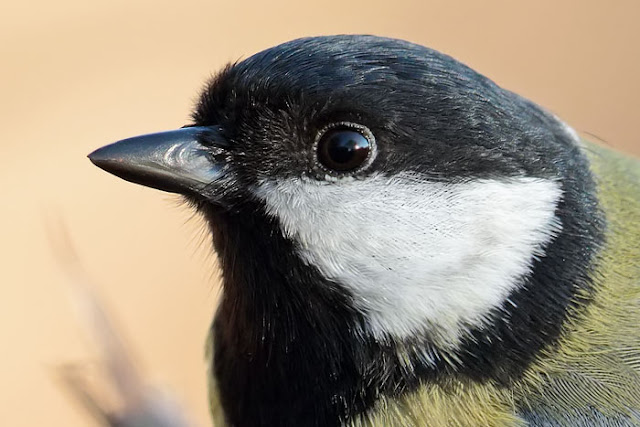 Great Tit - note the setting sun next to a tree in the reflection in the bird's eye!

As well as an elevated hide position, the other draw-back with this site is that the light goes off the area in front of the hide very early in the afternoon at this time of year (2pm or even earlier), and so by shortly after 3pm it was pretty dull and clearly time to leave. Nevertheless, it is one of the few places within reach that I know for close(ish) views of Bittern.
Posted by Stephen B at 20:05 No comments:

Despite the rotten forecast today, the Langley Lane hide seemed the place to start so that if the forecast rain arrived it wouldn't be too problematic. Arriving around 08:30 I was faced with a particularly bleak, grey and uninspiring scene! The light was poor and although there were plenty of the usual winter birds around there was nothing close enough to the hide to get interested in.

The only mildly notable bird was way off in the distance down the other end - a fine male Goosander.

With nothing much doing after more than an hour, I headed off to the North Shore hide to find much the same scene and the light seemed to getting worse by the minute, especially when the predicted rain duly arrived. About the only bird close enough to be of interest was a humble Gadwall. 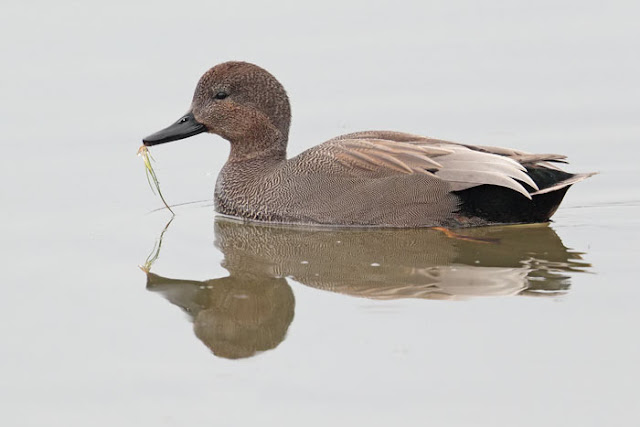 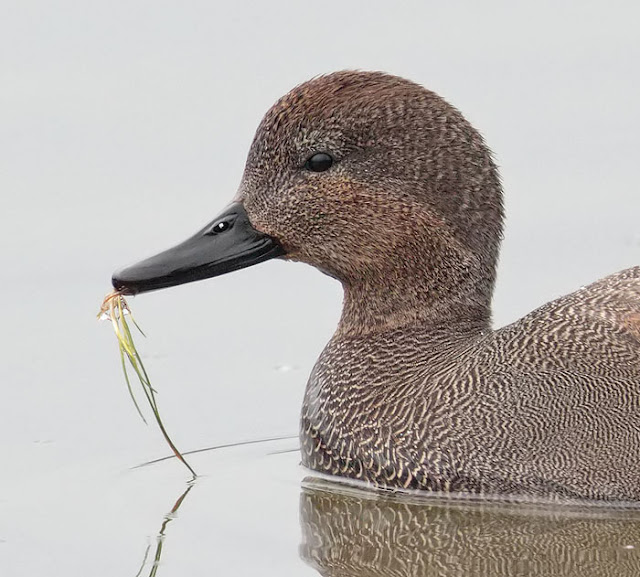 Crop of image above

The Goosander was a bit closer from this hide, and two Red-crested Pochard appeared as well. Returning to the Langley Lane Hide, there was again little nearby action, but the Kingfisher did put in a visit - with a momentary perch on the "branch" before speeding off into the distance. 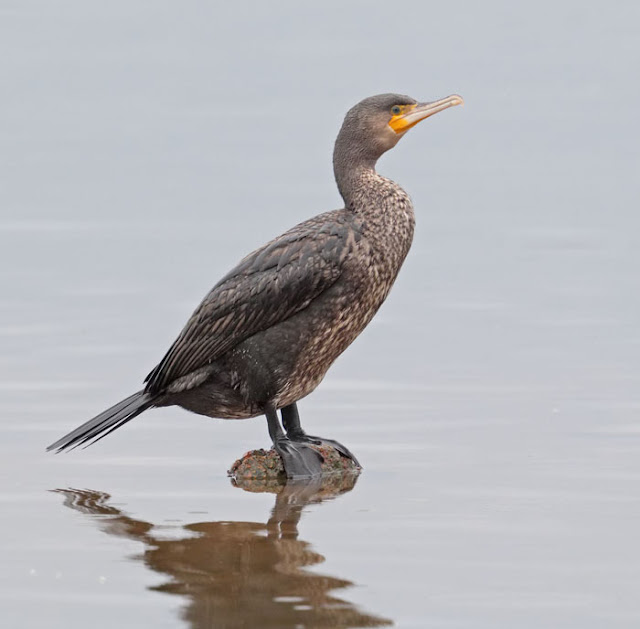 Cormorant also from the NS hide 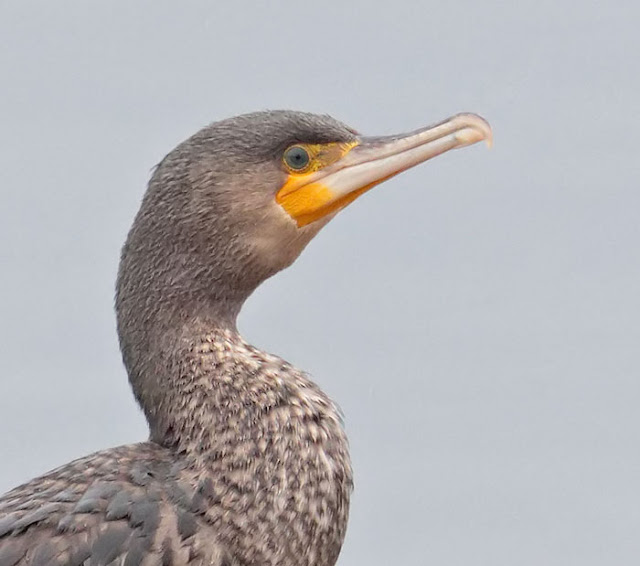 Out in the middle of the pit was a single Yellow Legged Gull with a very striking white head, given the time of year. 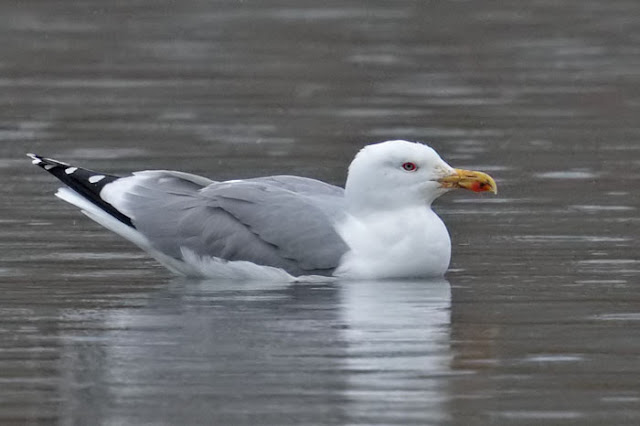 Distant Yellow Legged Gull
Posted by Stephen B at 16:58 No comments: