The Little Egret was being more obliging this time but no sign of the Kingfisher. 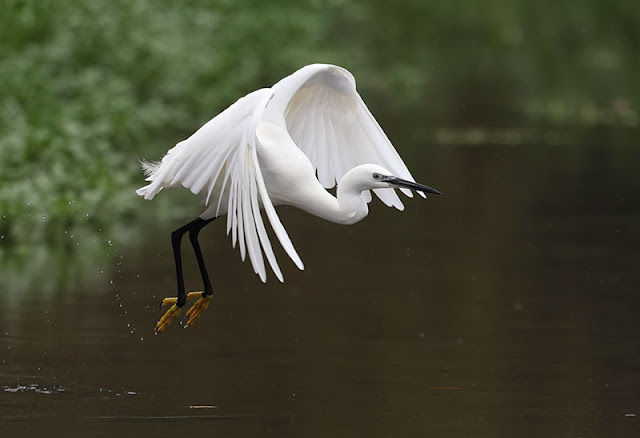 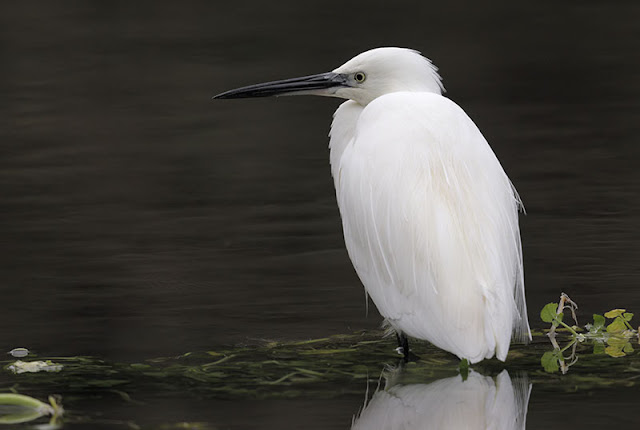 Arriving shortly after the gates opened it was soon clear that the weather wasn't living up to the forecast from earlier in the week. Instead of light cloud with some sun, it was grey with a fresh breeze from the west. Starting with the GND, which is normally to be seen on the eastern side of F2, near to the pontoons with the boats, I caught a couple of glimpses of it after a considerable amount of scanning. But the rough conditions made it difficult to see, and it certainly wasn't close. It then seemed to disappear so I tried my luck with the Scaup over on the western side of F1. Here the water was a lot calmer but for some reason all 3 birds were fast asleep most of time, even though the Tufted Ducks all around them weren't. When the female did eventually wake up, it then proceeded to swim right and into the sun, which was now being to emerge from time to time.

Giving this up as a bad job, I got a call from Bob suggesting that I look behind me! Down below he and another were seemingly concentrating on something perched on a tree just above the path near the Pinkhill Hide, but on the east side facing the mown grassy area. From my position I could just make out what it was they were photographing - the tame male Kestrel that others have come across recently in the same general area.

So I made my way down there as fast as possible, and to my amazement the bird was still there when I arrived and set up my gear. Not only that it tolerated a remarkably close approach by 3 (soon to be 4) photographers. It didn't seem at all bothered by our presence and remained on its perch for a few minutes before having a leisurely stretch and then flying off, not to be seen again.

As usual, click on the upper and lowest captions for larger images

As some of you may be aware, I've been enjoying playing with my new "toy" for the last couple of months - the mirrorless Canon EOS R5. Here is a photo of it mounted on the Canon EF 500mmf4 II lens with the x2 extender:

This camera has been received to almost universal acclaim judging by the reviews I have read online.

Game changing is the phrase I am using in my initial review. To see why, go to this page on my website.

Having been snagged by a fisherman's hook a couple of days ago the Great Northern Diver was unsurprisingly keeping its distance today, but this Scaup eventually proved more obliging in the nice sunny conditions early on today. Thanks to Bob for the heads-up on its presence and whereabouts.

Once again, click on the captions for larger images

After this relatively brief visit to Farmoor, I wanted to make the most of the sunny conditions and so headed to a new site for me near Buckland to attempt to find (and photo) the Crossbills that had been reported from here recently. I parked in the village and then took a public footpath diagonally across parkland to meet the A420, whereupon the private road and public footpath to a farm, frequented by the Crossbills, was directly opposite.

A flock of about ten flew in shortly after I arrived and promptly vanished into a tree whilst feeding. They were very difficult to photo being high up in the top of the tree and were generally invisible or highly obscured. This was the only time one appeared out in the open.

A further couple of shots from this site. As before, click on the captions for larger versions.

At last a worthwhile bird in Oxon to chase! My first visit was the previous afternoon when I saw the bird but only distantly as it was way out in the middle of  F2. Today, on arrival the bird was showing conveniently from the eastern bank, i.e. very close to the car park. This was most unusual as most good birds at Farmoor are as far as it is possible to be from the car park!

Unfortunately this bird was keeping its distance so a severe test even for the 500mm lens with the x2 converter and my new R5. Also the light wasn't great.

On its closest approach it had this low profile the whole time before turning round and swimming out.

It is not easy finding places for bird photography in Oxon currently and now Lockdown 2 is going to make it even harder!

I got lucky for a change with this Kingfisher, which has required some patience. Once again, click on the caption for a larger image.

This photo is surprisingly sharp considering the distance to the bird which required a substantial crop even when using my 500mm lens with the x2 TC. With the Canon R5, this crop and lens combination gave an effective focal length of just over 3000mm for this photo!

I was also fortunate to come across a couple of Stonechat by the road at Westcot Down - a stretch where I've sometimes had some success in the past. I was able to use the car as a reasonably effective hide for this shot. Of the two birds, only this first winter (I presume) seemed willing to come reasonably close!