I have at last been through most of the 18,500 photos I took in Australia back in October 2017, and prepared a gallery of a selection of about 100 of them on my website.

This was definitely the trip of a lifetime, and we managed to see most of our targets. The most striking thing was how tame so many of the species were - making it is so much easier to get quality photos than in the UK. Many were also very colourful - see below for a good example! 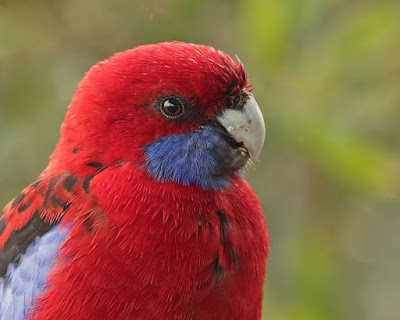 To go to the gallery, click here.  A written, illustrated trip report will follow in due course...
Posted by Stephen B at 09:54 No comments:

With Mick kindly posting on the Oxon Bird Log the previous day about a new location for Hawfinches at Northmoor Church, and Jim having reported flooding at Pit 60, my quickly formulated plan for my usual Sat am birding was to try Yelford for the Kumlien's Gull followed by Northmoor for yet another Hawfinch hunt.

The weather was dank, misty and dull when I arrived at Yelford and there were no gulls whatsoever in what I presumed was the right field, just to the west of the village. So I didn't hang around long before heading the short distance over to Northmoor - to find several birders already in and around the church yard. To my surprise there were even some Hawfinches to be seen, almost immediately after my arrival (at around 10:15am)! They were typically coming into the tall, bare trees around the church, including one right by the road at the front. It quickly became apparent that they were then diving into the adjacent yew tree to feed, whereupon they would disappear from view, appearing only briefly.

Remarkably, and despite the miserable forecast, the sun even came out briefly which gave superb light on the birds, when viewed from the vicinity of the church, and the boundary fence. They were still a bit distant, but the views were much better than I'd had previously at Barnard Gate or Ardington. I counted up to 8 in a single flock, and Nick saw 9. There could well have been more. Sadly as others started arriving, the birds seemed to melt away at around 11:30 and the sunny conditions evaporated.

I returned via Yelford, but there was again no sign of any gulls. 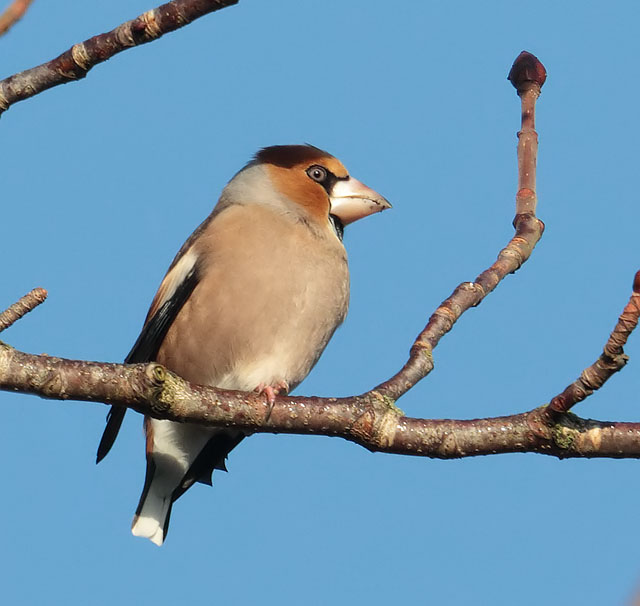 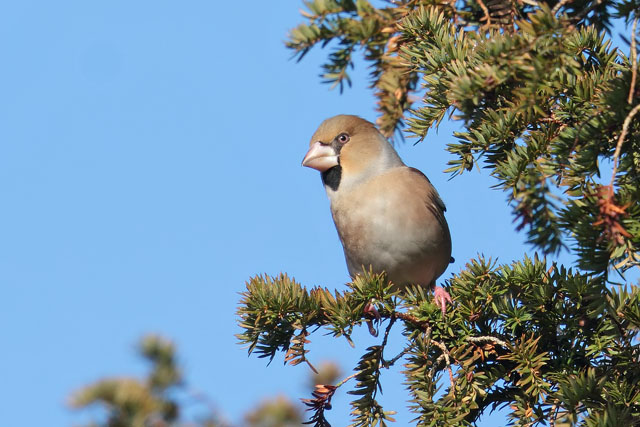 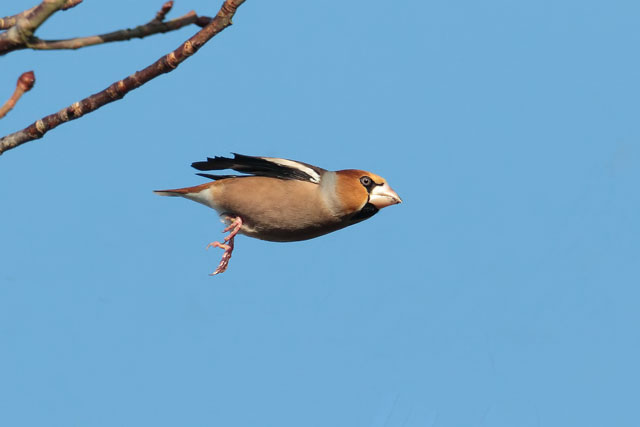 The flight shot was, I have to confess, an unintentional and very lucky one! I took a burst of images, as I often do, and while the shutter was clicking away at 10 frames/sec the bird decided to depart, in a direct approximately perpendicular to my viewing direction. This allowed the focus to be still reasonably OK and the fast shutter time kept the raw image fairly sharp.
Posted by Stephen B at 09:30 No comments: