Very very quiet birdwise at Farmoor today, but at least I finally caught up with the Ruddy Shelduck which was loafing around in the NW corner of F2, commuting between the causeway and the western bank. 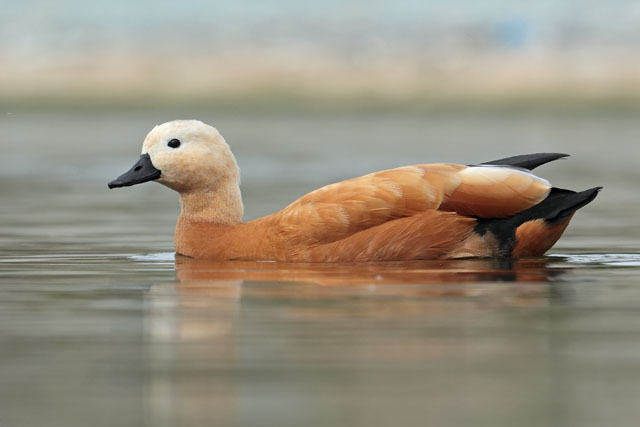 Ruddy Shelduck
Go to my website for a larger image

There were also almost zero birds at Pinkhill, but as the morning wore on and it got a little warmer and sunnier, out came various dragonflies, including 2-3 Migrant Hawkers, Brown Hawker and Common Darters. The hide seemed to be the place to attempt flight shots, as one was sometimes hovering reasonably close for a few seconds at a time. 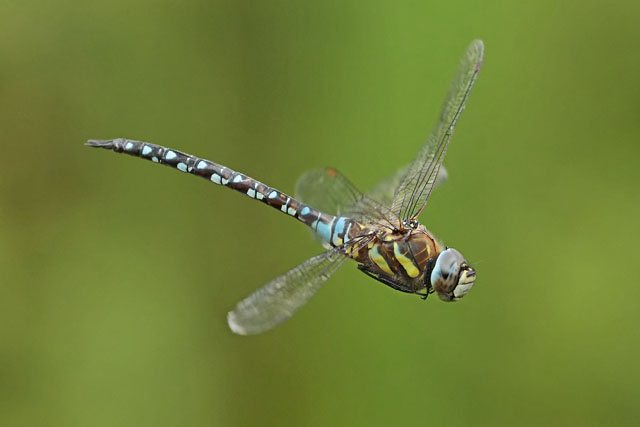 On my way back, I again  diverted to Faringdon Folly Park Pond, but whenever I go there it seems to cloud over.  Even so, there was some Odonata activity with more distant Small Red-eyed Damsels on the floating vegetation, plus both Ruddy and Common Darters closer too. When the finally the sun came out, so did the hawkers, with several Migrant Hawkers and one Brown Hawker. Not the best site for photography though, and all the locals attempting to fish don't help - not a good substitute for the much lamented Shellingford Pit. 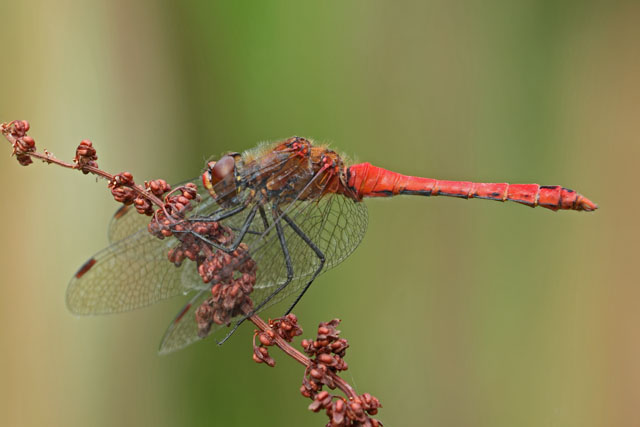 Ruddy Darter
Posted by Stephen B at 16:44 No comments:

Pit 60 from the Langley Lane Hide was really quiet this morning and produced almost nothing of interest in a wait of about 1.5 hrs. A good number of Sand Martins over the water was about it. Even the Little Egret, reported earlier, didn't show.

So I then tried the North Shore hide which is usually even worse, but this time there was a bit of interest in this solitary Common Sandpiper on the island in front of the hide, and a brief fly through Sparrowhawk 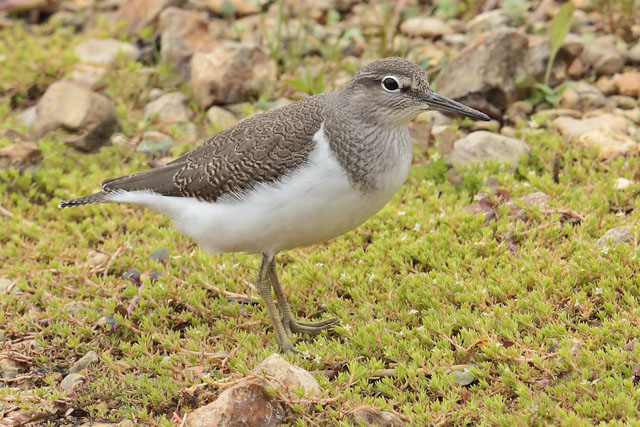 Common Sandpiper
Go to my website for a large image.

Thereafter I paid a brief visit to Faringdon Folly Park Pond, but this was during a dull spell and Odonata activity was limited to a few Small Red-eyes on the floating vegetation, a couple of Ruddy Darters and some Blue-tailed Damsels. No sign of the Emerald Damsels reported recently by Ian Smith and Bill Haynes.

For all the latest Odonata news in the county, go to my latest news page on my website.
Posted by Stephen B at 10:17 No comments:

I arrived at Farmoor slightly after its opening time to be told there had been no sign so far of the adult WWB Tern seen yesterday up until the evening. It sounded like it had gone, and sure enough nobody on the causeway had seen any sign of it.

After some time there, there didn't seem to be much point in staying any longer - despite a good number of hirundines and the odd Swift zooming about. Hence I made my way down to the Pinkhill Hide and, forewarned, entered the code now needed for the new lock. The scene before me was very different from earlier in the spring - with tall vegetation and several new pools immediately in front of the hide. Consequently, the views of the main area of water at the back were very obscured. The pools looked promising for dragonflies but the conditions were nothing like good enough for them, so as usual there was nothing to see!

I then decided to head down to the southern end to try to find the rather smart Ruddy Shelduck that had been present recently. However there was no sign of that either, so I had to make do with the pair of Egyptian Geese. 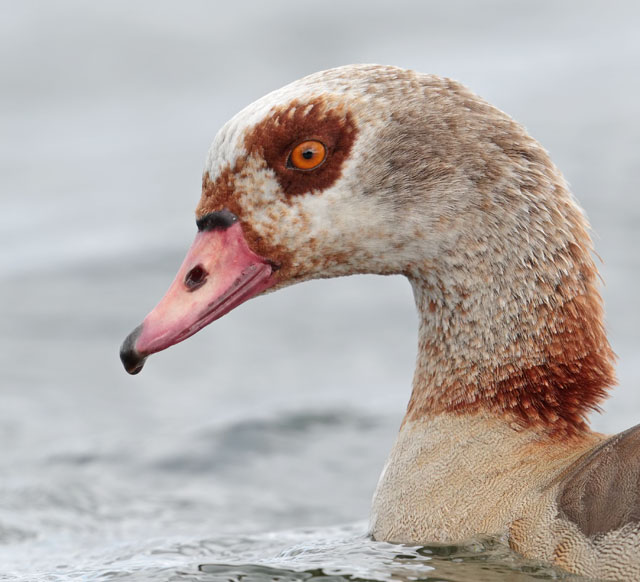 Egyptian Goose. Go to my website for a larger image

Thereafter I visited Ewelme Watercress beds for the first time, but of course there was no sign of the Great White Egret seen yesterday - hardly surprising given the compact size of this site, and its proximity to some surprisingly busy local roads.

On my return, I stopped off very briefly at Lark Hill in Wantage and was pleased to find a couple of Wheatears hopping around on the mown gross that covers the underground reservoir. It is a shame it is surrounded by a tall chain link fence!
Posted by Stephen B at 11:54 No comments:

This is a new site for me, which I decided to try this weekend, following Bill Haynes' stunning records of 60+ Small Red-eyed Damselflies, and various other Odonata, just a few days ago.

It is in a somewhat surprisingly urban location, very close to the new housing estates that have appeared recently in Faringdon. There is a small parking area at SU294948 from where is a short stroll to the pond which is used for fishing. There is a path that circumnavigates it, but the best spot for the SREs seems to be on the floating weed/moss off the nearest bank.

On Saturday morning, in a brief visit, abruptly curtailed by heavy rain, I found only 1 Small Red-eye but there were several other species around, including 2 late Emperors (one ovipositing) over the far side, Common Darters, inc a tandem pair also ovipositing, and Azure and Blue-tailed Damsels.

This afternoon there was no rain but conditions were far from ideal with only occasional sunny intervals. Nevertheless there were several SREs on view (perhaps 20+).  I spent some time trying for photos which were far from easy as they were some way out on the weed, and rarely presented themselves sideways on. Also there was one Brown Hawker, a few Blue-tailed Damsels and the odd Common Darter.

So with the sad demise of Shellingford Pit, it seems that this urban pond is now the premier site in the County for Small Red-eyes! 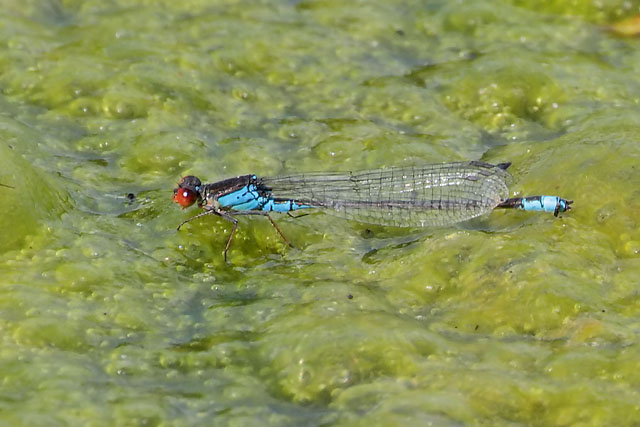 For all the latest news on dragonflies and damselflies in Oxfordshire, see the current sightings page on my website.
Posted by Stephen B at 20:11 No comments: